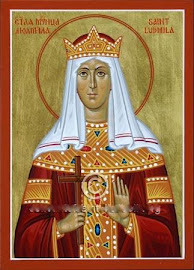 But, says Dr Jakub Izdný of the Institute of Czech History at Charles University, author of a new book on Ludmila published ahead of the 1100-year anniversary of her death, she is the first historically known Czech woman, and quite likely the first woman to rule Bohemia.
read more here @ Radio Prague International
Posted by Melisende at 8:52 PM