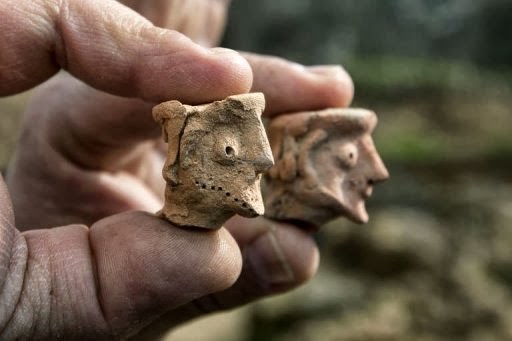 Female figurines and inscribed prayers to a "divine couple" found in temples in Israel suggest that the “one God” of the Bible may not have been entirely alone.

A recent excavation in Tel Motza, not far from Jerusalem, found what archaeologists believe to have been a ritual building - with clay figures of animals and men from the time of the First Temple, according to Israel's Haaretz news site.

The find suggests that Iron Age religion in the area around Jerusalem may not have been monotheistic just before the time the Hebrew Bible – the basis of the Old Testament - started to be written.


Now experts are increasingly suggesting that far from there being “one God”, there were many.

One expert, Professor Francesca Stavrakopoulou of the University of Exeter, says there is “increasing evidence” of Israelites worshipping several gods - including one who may have been seen as Yahweh’s “wife”.
Posted by Melisende at 7:51 PM No comments: 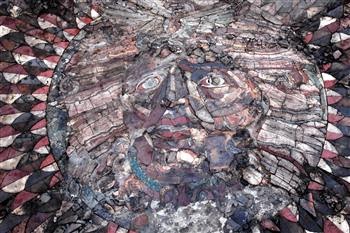 The mosaic was discovered in 2009 in the ancient city of Kibyra in the southern province of Burdur’s Gölhisar district during excavation work carried out by Mehmet Akif University. About 95 percent of the mosaic remains despite being around 1,800 years old.

“The mosaic is made up of thin, colored marble plaques. The technique used is called ‘Opus Sectile’ and there is no other Medusa in the world made with this technique,” said the head of excavations, Professor Şükrü Özüdoğru.

He said the restorers had presented him with a report about the restoration and conservation of the Medusa. “Next year, we will restore the Medusa. After the restoration, the Medusa will be covered with glass and opened to visitors.”
Posted by Melisende at 7:46 PM No comments: 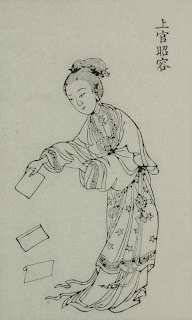 Chinese archaeologists have discovered the tomb of a 7th century female politician who was one of the most powerful women in the country's ancient history, local media said on Thursday.


Shangguan Wan'er -- who lived from 664 to 710 in the Tang dynasty -- was a trusted aide to China's first female emperor Wu Zetian, and married to Wu's son, while having relationships with both the empress's lover and her nephew.
As a sequence of murders, coups and affairs enveloped the dynasty, Shangguan Wan'er's husband Li Xian briefly became emperor -- only to be killed by his senior wife, who took power herself.
She was deposed in turn by Li Longji, who killed both her and Shangguan Wan'er.
The site was discovered near an airport in Xianyang in northern Shaanxi province and confirmed by an epitaph, China Radio International said on its website.
Posted by Melisende at 4:44 PM 1 comment: