The following is a guest post by Laura Diaz on an intriguing woman from Spanish history.  Please enjoy!

Joan of Portugal is one of the most misunderstood women in history as her role during her time as Queen of Spain during the late 15th Century has never truly been agreed upon. Some have described her as power-hungry, while others saw her as a victim to an unsupportive husband. Joan, sister of the King of Portugal, married into the Spanish royal family during King Henry IV's reign—brother of the future Queen Isabella the Catholic.

Joan was the second wife of Henry IV as his first three-year marriage was granted an annulment, as it had never been consummated. Seven years after their marriage, Joan finally had her first daughter, also named Joan, but her paternity was always in doubt. Detractors of the court claimed that Joan was having an affair with Beltran de la Cueva, advisor to the court, and that he was the real father. Joan and Henry denied that claim, and insisted she was the rightful heir to the throne.
During this period, Joan insisted that Henry's teenaged brother and sister, Alfonso and Isabella, forcefully be brought to the castle and away from their sick mother. Many saw this as a way of making sure her daughter's path to the crown would encounter no obstacles.

The growing state of discontent amongst the Spanish kingdom, led noblemen and peasants to support Henry's brother, Alfonso, to be the next king, alleging he was the legitimate heir to the throne. Joan forcefully opposed this using all her political connections to try and stop this growing movement.  As rumors of Joan's sexual indiscretions grew, one of the nobles terms in negotiation was that Henry banish his wife from the court to live with Bishop Fonseca, one of his greatest supporters during the conflict. Henry agreed, trying to remain in power and please those around him.

Scandal broke that Joan had a love affair with the Bishop's nephew and became pregnant with twins. This confirmed the previous rumors and, combined with the weakness of King Henry, the nobility was successful in forcing him to step out of power and name his middle brother Alfonso as King of Castile.

Alfonso's reign only lasted a few years as he mysteriously died soon after taking the thrown. A new war emerged looking for the heir to the throne. Joan once again tried to push her daughter as the legitimate heir, but all the previous conflicts had left her essentially powerless. Isabella proved to be stronger, married King Ferdinand of Aragon, and garnered the support of the nobles. She was declared Queen.

Eventually Joan died in Madrid, away from all the power she once sought. There is no evidence to prove or refute all the claims that were made about her, but it is clear that she was a divisive figure. Perhaps all she wanted was to remain in power through whatever means necessary or maybe she was just a women looking for love and supporting her family, but all in all, no one can deny she was a strong and powerful woman.

Images come from the Spanish series Isabel, a modern hit telling the story behind this amazing period of time in the Spanish court.

Links to the Spanish series "Isabel": 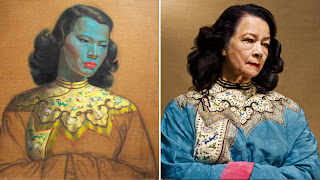 
Earlier this year Vladimir Tretchikoff's portrait Chinese Girl, often referred to as The Green Lady, was sold for almost £1m ($1.5m) at auction in London - a reflection of its status as one of the most popular prints ever made. The model, Monika Pon-su-san, recalls what it was like to be thrust into the limelight.

One day in 1950, a curly-haired stranger walked into my uncle's laundry in Cape Town, where I worked. He stood there as I served a customer, his eyes fixed on me the whole time. He only spoke when we were alone together in the shop. "Hello!" he said. "I'm Tretchikoff. I'd love to paint you."

At that time Vladimir Tretchikoff wasn't very famous but by chance I had read about him in a newspaper just the Saturday before. So I was a bit nervous, but I said yes. He picked me up after work and took me back home.

Posted by Melisende at 8:41 PM No comments: