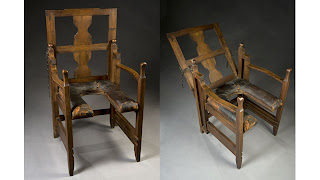 From the ancient times until the 1800s, many women gave birth with the aid of parturition chairs, specially designed seats that allowed women to sit upright or recline while giving birth. This particular chair had padded leather rests for the mother's legs, but the parturition chairs came in a number of flavors. Some had extendable leg rests that aren't a far cry from modern gynecological stirrups. Others were much simpler, simply giving those assisting with the birth easy access to the infant while the mother remained somewhat upright.

Varying reports are surfacing that four Iranian women have been stoned to death.

Read More Here -: MFS - The Other News:
Based on reports received by the Melli-Mazhabi  (Religious-Nationalist) website (English translation can be read here), security agents from the Iranian Judiciary transferred the bodies of four women who had been stoned to death to the Tehran forensic medicine department. The bodies are currently in freezers at this department.

The stoning executions occurred two days after the Chair of Judicial and Legal Committee of the Iranian Parliament announced that the act of stoning had been replaced by alternative forms of punishment. According to Allahyar Malekshahi, conditions of adultery, the burden of proof, and the punishment for the offence were discussed in the Committee. According to Mr. Malekshahi, “In Iran’s [Islamic Penal] Code, adultery is punishable by death, but conditions on how to prove the act of adultery has taken place are not mentioned. In order to clarify the law, a separate section was added to distinguish the conditions under which a relationship is qualified as adultery.

Warning: the above links contain images many will find distressing.
Posted by Melisende at 7:18 PM No comments:

Hundreds gathered at Boudhanath Stupa on Sunday to welcome 13 indigenous “grandmother” shamans from across the world to Nepal for their first visit as a group.

The spiritual elders - including Nepal´s Tamang healer, Aama Bombo - are touring Nepal for the 12th gathering of the International Council of 13 Indigenous Grandmothers.  The Council was formed in 2004 to promote alternative medicine, shamanism, indigenous culture, and the urgent need for social change across the globe.


Shamanism is becoming controversial in some sections of the country as more and more people embrace Western medicine.
Posted by Melisende at 5:12 PM No comments: