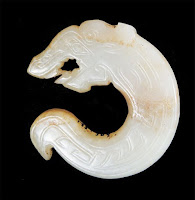 Ancient queen, priestessand leader of warriors | Shanghai Daily
THE story of the woman warrior Hua Mulan has been passed down in history through ballad, film and drama for 1,600 years. Much of the tale’s popularity comes from the rarity of a heroine in a time when women were largely relegated to domesticity.
No artifacts have actually been discovered yet to prove the existence of Mulan, but an exhibition at Capital Museum is capturing attention with revelations of an even earlier female warrior named Fu Hao.
She lived more than 3,000 years ago. Her life is being pieced together through oracle bones, bronze and jade weapons, jewelry and vessels found at an excavation of her tomb in what is now Henan Province in central China.
The museum tribute to her is entitled “Queen, Mother, General — the 40th Anniversary of the Excavation of the Shang Tomb of Fu Hao.” The exhibition at Capital Museum in Beijing runs until June 26.
Posted by Melisende at 9:02 PM No comments:


The poet Sappho from the Greek island of Lesbos was revered almost as much as Homer in classical antiquity. Plato called her the Tenth Muse and she appeared on coins and statues for centuries. She reportedly created at least 9 books worth of verse containing 500 poems, but sadly all that remains are about 200 fragments recovered in the late 1800s from a garbage dump in Oxyrynchus, Egypt.

According to Michelle Starr at CNET, the researchers used software called Starry Night (version 7.3) and Digistar 5 from the International Planetarium Society to recreate the night sky as seen from the Greek island of Lesbos. They chose to start with the year 570 B.C., the year Sappho died and the only reliable date associated with her.

Posted by Melisende at 7:52 PM No comments:

The Most Successful Literary Hoaxes in History — Barnes & Noble Reads

The Most Successful Literary Hoaxes in History — Barnes & Noble Reads
Whether or not you enjoy a good hoax depends on your perspective; put simply, if you’re the victim, you probably won’t be amused. But, as they say, time heals all wounds, and a truly worthy hoax can be appreciated for its genius once enough time has passed. Here are eight literary hoaxes that were so successful, you simply have to admire them.
Blog post by Jeffrey Somers
Posted by Melisende at 11:11 AM No comments:

Archaeology: "Women in a Temple of Death"

Archaeology: "Women in a Temple of Death" - Peru this Week

Archaeologists specializing in Peru’s north coast were forced to come up with new answers when they unearthed the unexpected.

Contrary to the long-established tradition of ancient societies in the region to kill male prisoners and drink their blood, researchershave found the remains of the bloody sacrifice of six young women in about A.D. 850, reports Archaeology.

Uncovered beneath the floor of a mudbrick temple in Pucalá, just outside of Chiclayo, the remains of six women perplexed archaeologists.

Posted by Melisende at 9:43 AM No comments:

Egyptian Mummy's Symbolic Tattoos Are 1st of Their Kind

Egyptian Mummy's Symbolic Tattoos Are 1st of Their Kind

More than 3,000 years ago, an ancient Egyptian woman tattooed her body with dozens of symbols — including lotus blossoms, cows and divine eyes — that may have been linked to her religious status or her ritual practice.

Preserved in amazing detail on her mummified torso, the surviving images represent the only known examples of tattoos found on Egyptian mummies showing recognizable pictures, rather than abstract designs.

The mummy was found at a site on the west bank of the Nile River known as Deir el-Medina, a village dating to between 1550 B.C. and 1080 B.C. that housed artisans and workers who built the royal tombs in the Valley of the Kings. [In Photos: Egypt's Oldest Mummy Wrappings]

Posted by Melisende at 9:28 AM No comments:

Mysterious Braided Hair May Belong to Medieval Saint : Discovery News
A braided head of hair found buried beneath a medieval abbey in England has given up some of its secrets, thanks to a scientist’s curiosity about the relic, which he first saw when he was a schoolboy.
Jamie Cameron, an archaeological research assistant at the University of Oxford in the United Kingdom, first visited Romsey Abbey, near the city of Southampton, on a school field trip when he was 7 years old.
Cameron said he became curious about the abbey’s display of a brightly colored and braided head of hair, which had been found in a lead casket buried beneath the abbey floor. But at the time, nothing was known about the identity of the hair’s owner. [See photos of the mysterious braided hair found at Romsey Abbey]

Posted by Melisende at 8:48 AM No comments: