450-Year-Old Book Reveals What to Name a Baby Samurai

What should you name a baby samurai? What food should a samurai bring to a battle? What is a samurai's most treasured possession? A newly translated 450-year-old book supposedly written by a renowned samurai provides answers to these and many other questions about the Japanese swordsmen.

Called "The Hundred Rules of War," the book is a series of songs that could be sung by samurai, who had never gone into battle. It was supposedly written in Japanese in 1571 by a famous samurai named Tsukahara Bokuden, who lived from 1489 to 1571, during a war-ridden time in Japan. Stories told about Bokuden claim that he fought in over 100 battles and slew hundreds of swordsmen.

The book was recently translated into English by Eric Shahan, who specializes in translating Japanese martial-arts texts. The book was first printed in Japanese in 1840, and has been republished in Japanese several times since then, Shahan told Live Science. 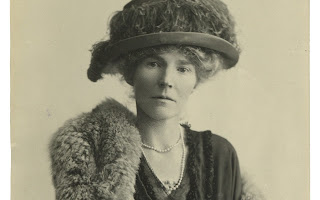 In a picture taken to mark the Cairo Conference of 1921, Gertrude Bell - characteristically elegant in a fur stole and floppy hat, despite being on camel back - sits right at the heart of the action. To one side is Winston Churchill, on her other TE Lawrence, later immortalised in David Lean’s 1962 epic, Lawrence of Arabia.

Bell was his equal in every sense: the first woman to achieve a first (in modern history) from Oxford, an archaeologist, linguist, Arabist, adventurer and, possibly, spy. In her day, she was arguably the most powerful woman in the British Empire - central to the decisions that created the modern Middle East and reverberate still on the nightly news.  Yet while Lawrence is still celebrated, she has largely been forgotten.

read more her @ The Telegraph

Posted by Melisende at 7:06 PM No comments:

Another intriguing article from Live Science:

The remains of at least four female heads, made out of ceramic, have been discovered at the ancient town of Porphyreon, located in modern-day Jiyeh, Lebanon.

The four female ceramic heads have a mix of Greek and Phoenician traits, as well as elements of Egyptian origin, Gwiazda said. For instance, one of the heads has a depiction of a Wadjet amulet (a type of amulet that shows an eye) on its breast, Gwiazda said. These amulets were originally used by the ancient Egyptians, who believed that these charms could help protect the wearer from harm.

Sarah Siddons - The most famous tragedienne of the 18th century

Sarah Siddons was an actress born in Wales and was the most famous tragedienne of the 18th century, most notably for her role as Lady Macbeth, the wife of the play’s protagonist in Shakespeare’s Macbeth.

Sarah Siddons was a star. A charismatic character that enchanted everybody on and off stage. Unfortunately, her private life wasn’t as bright as her social life and acting career. In 1773, when she was only 18, Sarah married the actor, William Siddons.

They had seven children together, but Sarah outlived five of them, while her marriage ended up in an informal separation. Sarah died in 1831, at the age of 75, and was interred there in Saint Mary’s Cemetery at Paddington Green.


read more here @ The Vintage News
Posted by Melisende at 6:28 PM No comments:

About 60 drawings and hieroglyphic inscriptions, dating back around 5,000 years, have been discovered at a site called Wadi Ameyra in Egypt’s Sinai Desert. Carved in stone, they were created by mining expeditions sent out by early Egyptian pharaohs, archaeologists say. They reveal new information on the early pharaohs. For instance, one inscription the researchers found tells of a queen named Neith-Hotep who ruled Egypt 5,000 years ago as regent to a young pharaoh named Djer. Archaeologists estimate that the earliest carvings at Wadi Ameyra date back around 5,200 years, while the most recent date to the reign of a pharaoh named Nebre, who ruled about 4,800 years ago.

Posted by Melisende at 6:24 PM No comments:

Egyptian pharaoh Tutankhamun's wet nurse might have been his sister

From The Guardian comes this article on the family life of Egyptian Pharaoh, Tutankhamun:

Maia was the wet nurse of Tutankhamun, whose mummy was found in 1922 by renowned British Egyptologist Howard Carter in the Valley of Kings in Luxor along with a treasure trove of thousands of objects.

DNA tests have proven that the pharaoh Akhenaten was the father of Tutankhamun. The identity of his mother has long been a mystery, although she is not believed to be Akhenaten’s Queen Nefertiti. Some theories suggest the boy king’s mother was one of his aunts.

“Maia is none other than princess Meritaten, the sister or half-sister of Tutankhamun and the daughter of Akhenaten and Nefertiti,” Zivie said.

The mummy of Meritaten has not been found, but antiquities minister Mamduh al-Damati said on Sunday it could be in a secret chamber inTutankhamun’s tomb.


read more here @ The Guardian
Posted by Melisende at 6:20 PM No comments:

From Daily Mail Online comes this mystery from 1676:
A 17th century 'letter from the devil' written by a Sicilian nun who claimed to be possessed by Lucifer, has finally been translated thanks to the dark web.
The coded letter was written by Maria Crocifissa della Concezione at the Palma di Montechiaro convent in 1676, and she claimed it had been scribed by Satan using her hands.
Some 340 years later, a group of Italian computer scientists unscrambled the code using decryption software they found on the dark web, and found it does carry a devilish message - describing God and Jesus as 'dead weights'.
Sister Maria Crocifissa della Concezione was born Isabella Tomasi in 1645, but was rechristened once she entered the Benedictine convent at Palma di Montechiaro aged 15.

Posted by Melisende at 5:44 PM No comments:

The Benin ivory mask is a portrait of the Queen Mother Idia of the Benin Empire in the 16th century, made like an African traditional mask. 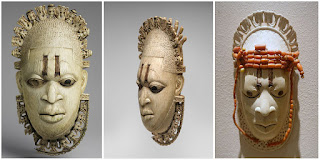 This miniature sculpture was worn as a pendant by the queen’s son Oba (which means King) Esigie. There are two almost identical pendant masks today, one of them is in the British Museum in London, and the other one is at the Metropolitan Museum of Art in New York. The bought masks are portraits of the queen and symbolize the legacy of the Benin dynasty that continues to the present day.