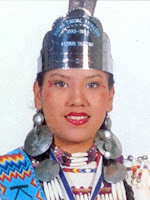 I would like to add an update to my September blog on Amber Toppah.  The image used was not correct.  As such I have updated the post with the correct image (to the right ->>).

My humble apologies to Amber who altered me to the error. 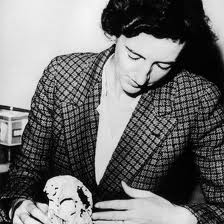 From the Christian Science Monitor:


She was a talented artist, specializing in early Stone Age, able to flawlessly draw early tools and artifacts. He had a passion for fossils since he found arrowheads and tools as a child. Together, Mary and Louise Leakey would change the scientific world and leave a lasting family legacy.

It was 1936 when they married, unknowingly creating the family that would go on to dominate paleoanthropology. They had three sons, one of which inherited the family business. Since then, at least one member of each generation of Leakey children has been involved in major paleoanthropological finds.

See also: Leakey: A Century of the Leakey Family in East Africa

Further to my blog post from May 2012 - France: Paris' Trouser Law - comes this update from BBC News:


The French government has overturned a 200-year-old ban on women wearing trousers.
The Minister of Women's Rights, Najat Vallaud-Belkacem, said that the ban was incompatible with modern French values and laws.
She said the law, imposed on November 17, 1800, had in effect already been rescinded because of incompatibility.
The move to formally repeal the law followed a parliamentary question asked last year.
According to the law, women needed to have the permission of local police if they wanted to "dress like a man" and wear trousers.
Though it has been ignored for decades, formally it remained on the statute books.
Ms Vallaud-Belkacem said the original law had been intended to prevent women doing certain jobs.
Posted by Melisende at 6:17 PM 4 comments: 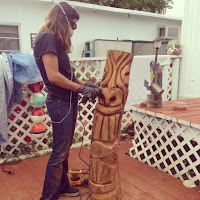 Further to my blog post on Mayte Almeida in May 2009, comes this update.

Having retired from the ariplane business, Mayte has diversified her talents into painting, photography and chainsaw carving.

I have attached some images from this talented female artist.

You can see more via Google+ . 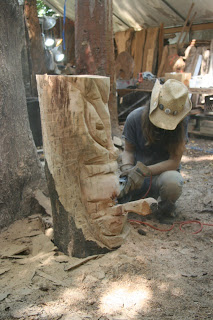 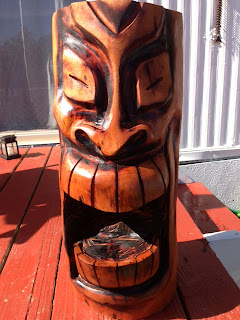 Posted by Melisende at 3:56 PM No comments: 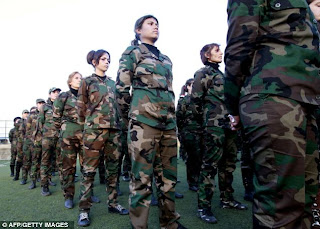 Syrian President Bashar al-Assad has recruited an army of women to guard checkpoints and carry out security checks in an attempt to plug the holes left by defections and casualties in his dwindling army.

Up to 500 women have been drafted into the new paramilitary force known as the 'Lionesses for National Defence.'

They have been in trained at a boot camp in Wadi al-Dahab in the Syrian city of Homs.

They form part of the recently formed 10,000-strong National Defence Force (NDF), a key part of Assad's counter insurgency strategy, as the president desperately tries to regain control of the country's towns and cities.

Decked out in army fatigues and armed with Kalashnikov assault rifles, the women have also been seen guarding areas of Homs where the majority of locals are known to support the government's regime.

Posted by Melisende at 3:40 PM No comments:


Barbie has proven a controversial figure since her shapely beginnings in 1959, but as time and different civil rights movements have marched forward, Barbie’s image has morphed to include various races and cultures. Now, she’s going bald for a good cause. 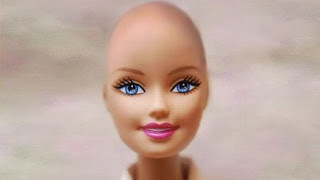 Mattel, the makers of Barbie, announced last month that a hairless "friend of Barbie" will "be distributed exclusively to children’s hospitals and other hospitals treating children with cancer throughout the U.S. and Canada, directly reaching girls who are most affected by hair loss." The decision came after a facebook group called "Beautiful and Bald Barbie! Let’s see if we can get it made" scored thousands of "likes" within hours of its creation.
Posted by Melisende at 3:36 PM No comments:

From Secretary To King 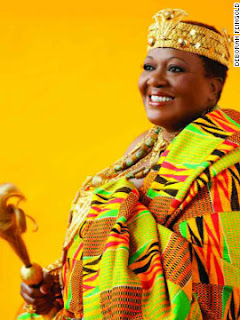 When Peggielene Bartels went to bed on a summer night in 2008, she was an ordinary administrative assistant living in a modest one-bedroom condo just outside Washington D.C.

But a few hours later, when a persistent ringing phone woke her up in the dead of the August night, the 55-year-old found out she was much more than simply a secretary.

At the other end of the line was Bartels's cousin, from Otuam, a small fishing village on the coast of Ghana. Excited and humble, he congratulated her on being the new king of Otuam.

After the initial shock, Bartels decided to accept the kingship. Over the course of a few days, she went from being plain old Peggielene Bartels, who had worked for nearly three decades at the Ghanaian Embassy in the United States, to becoming King Peggy -- the first female king of Otuam, reigning over approximately 7,000 people.

Posted by Melisende at 3:32 PM No comments: