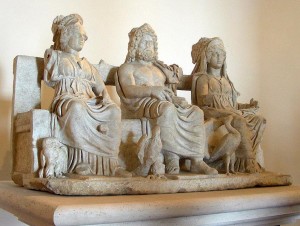 Juno Capitolium was another goddess called upon by new brides and wives, for She is a goddess who protects the sanctity of marriage vows and marital relations.  A story grew up that Juno, already angry over her husband’s affairs, became even more infuriated when She learned that Jupiter had given birth to a daughter. To relieve Jupiter’s headache, Vulcan split open His head with a mallet and out arose wise Minerva. Grey-eyed Minerva was addressed as “most chaste goddess” because Her conception and birth had not resulted from sexual intercourse. Juno was so angered by this that She decided that She, too, would bear a child on Her own, without any help from Jupiter. She enlisted the help of Flora, Goddess of Flowers, who provided Juno with a sacred lily that held pollen-laced dew. This was the semen that Flora poured from the lily into Juno’s ear. This immaculate conception of Juno is celebrated on 2 May as another sort of Matronalia comparable to modern Mother’s Day. Then, on the first day of the New Year, the first day of March, Juno gave birth to Mars.
Posted by Melisende at 12:27 PM 1 comment: 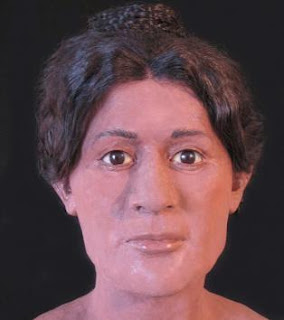 In the spring of 1913, women in six states had the right to vote in all elections: Wyoming, Colorado, Utah, Idaho, Washington and California. Despite these successes, though, the momentum of the 65-year-old suffrage movement was slowing. It was like a car running on fumes.
Alice Paul decided to give it some gas. Having recently returned to the States from England, where she cut her teeth as a suffragist, the 28-year-old New Jersey native pitched an idea to the National American Woman Suffrage Association. She would organize a suffrage parade in Washington, D.C., strategically timed with the influx of crowds arriving for President Woodrow Wilson’s inauguration, to drum up support for the cause. NAWSA appointed Paul the chair of its Congressional committee and approved her plan, but made it clear that she would have to come up with the money for the parade on her own.
Links:
Womens' Suffrage Parade of 4th March 1913
Womens' Suffrage March - wikipedia