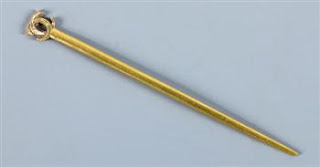 A hairpin belonging to 16th century French Queen Catherine de Medici has been discovered at a royal residence outside Paris. What has conservators scratching their heads is exactly where it was found: down a communal toilet.

Officials said it’s the first time in modern history that a possession of the Renaissance royal has been found at Fontainebleau Palace. Though the queen was renowned across Europe for her lavish jewelry, much of her collection has been lost, sold or stolen over the centuries.


The rare 9 centimeter-pin was identified easily because it bore interlocking C’s - for “Catherine.” The artifact was found by accident as archeologists dug around the toilet to prepare the surrounding area for restoration.

Droguet called the find a “mystery.” “But what would Catherine de Medici be doing there? Maybe it was a lady-in-waiting who took it. Perhaps it just fell in.”
Posted by Melisende at 9:15 PM 1 comment:

From CBN:
Every 12 seconds, a baby girl is aborted in India. That's about 7,000 girls killed every day just because they are females.

The United Nations now calls India the most dangerous place on earth for a girl. So why are these parents taking such action?

CBN News went searching for answers in a remote village of Rajasthan in northeast India. In rural villages and big cities, millions of families are turning to men like Kilash Boria to help eliminate their girl children. For more than two decades, Boria's father was known around Rajasthan as the medicine man. He created a secret brew that he'd give to pregnant women to help abort their babies.

Abortion is legal in India. Sex-selective abortion, however, is illegal but widely common. The impact is devastating, with census figures showing the child sex ratios getting worse. In 2001, there were 927 girls for every 1,000 boys. Now the girls in that ratio are down to 914. In some parts of the Indian state of Punjab, the ratio is as low as 300 girls.
Posted by Melisende at 9:11 PM 1 comment: 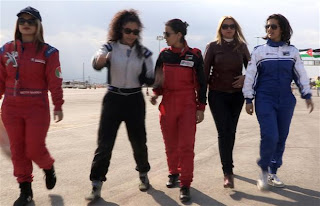 Director Amber Fares is the first to admit that she knew absolutely nothing about racing before she met the Speed Sisters in late 2009. An Alberta-born filmmaker now living in Ramallah, Palestine, Fares was introduced to the first all-women racing team in the Middle East by a friend at the British consulate in Jerusalem. The consulate hired her documentary film company SocDoc Studios to create a program of video clips called “Speed Sisters.” At the time, there were two or three women racing an old donated BMW that they had souped up to get track-ready.

“We were involved in doing these clips and it wasn’t long before we were like, ‘Wow! This is really interesting. There’s a larger documentary here,’” Fares says. Her relationship with the team went on from there and she has been filming the Speed Sisters regularly for a feature-length documentary since the racing season started in March 2010.

Posted by Melisende at 9:05 PM No comments:


The mother of the world’s first test-tube baby has died at the age of 64.

Lesley Brown made medical history nearly 34 years ago  when she gave birth to Louise.

Mrs Brown and her husband John had been trying for a baby for nine years when they signed up to what was then an experimental procedure, in vitro fertilisation.

She became pregnant at the first attempt, and 5lb 12oz Louise Joy Brown was born by caesarean section at Oldham General Hospital at 11.47pm on July 25, 1978.

The event, which gave hope to countless infertile couples, captured the imagination of the world after it was reported exclusively by the Daily Mail under the headline The Lovely Louise.


Women's boxing is an Olympic sport for the first time, with 36 fighters in three weight classes competing to make history with its first medals. A sport long derided as a sideshow by elitists has been hotly competitive for several years, and the debut Olympic tournament is expected to bring worldwide attention and cachet to boxing, which has slipped into secondary status after decades as a main Olympic event.
Boxing joined the Olympic program in St. Louis in 1904, but was the only Summer Games sport without a female analogue until 2009, when the IOC added a women's competition to the London program. Supporters had argued for the addition for several years.

Posted by Melisende at 8:55 PM No comments:

Email ThisBlogThis!Share to TwitterShare to FacebookShare to Pinterest
Labels: sport, women in sport


An Indian father beheaded his daughter with a sword and paraded it through his village after learning of her alleged "indecent behaviour" with men.
Police in the northern Indian state of Rajasthan say they were shocked when Oghad Singh turned himself over to authorities with the severed head and sword still in his hands.
Singh's daughter, Manju Kunwar, 20, was living with her parents after leaving her husband two years ago.
Police Superintendent Umesh Ojha says Singh was upset by his daughter having affairs with men and became enraged when she eloped with one of them two weeks ago, NY Daily News reports.
Supt. Ojha said Singh forced her to return home Sunday and beheaded her Monday with a sword.
Posted by Melisende at 8:31 PM No comments: 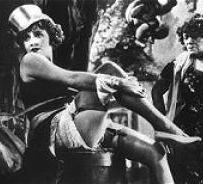 Having seen glimpses of the original German movie, I was overjoyed when SBS in Australia put forward this documentary: "The Blue Angel: Birth of A Legend".

"The Blue Angel is based on Professor Unrat (literally Professor Garbage), a 1905 novel by German novelist Heinrich Mann [1871-1950]. The novel was adapted for the movie, titled 'Der blaue Engel', by German screenwriters Carl Zuckmayer, Karl Vollmöller, and Robert Liebmann, along with Austrian-American film-maker Josef von Sternberg (who also directed the movie). Both the novel and the movie were banned in Nazi Germany in 1933 as being 'contrary to the German spirit.' (Source: Blue Angel FAQ @ IMDb)

Posted by Melisende at 3:27 PM No comments:

From The Christian Science Monitor: 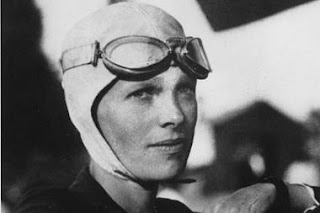 For decades, pioneer aviator Amelia Earhart was said to have “disappeared” over the Pacific on her quest to circle the globe along a 29,000-mile equatorial route.

Now, new information gives a clearer picture of what happened 75 years ago to Ms. Earhart and her navigator Fred Noonan, where they came down and how they likely survived – for a while, at least – as castaways on a remote island, catching rainwater and eating fish, shellfish, and turtles to survive.
The tale hints at lost opportunities to locate and rescue the pair in the first crucial days after they went down, vital information dismissed as inconsequential or a hoax, the failure to connect important dots regarding physical evidence.

Posted by Melisende at 9:35 PM No comments:


Child marriage, known as ‘Bal Vivaha’, is believed to have begun during the medieval ages of India. Later child marriage became a widespread cultural practice with various reasons to justify it, and many marriages were performed while the girl was still an infant.
After independence, the feudalistic character of the Indian society coupled with caste system gave a major boost to incidences of child marriage, particularly in the rural areas.
“Castes, which are based on birth and heredity, do not allow two people to marry if they are from different castes. This system was threatened by young people’s emotions and desires to marry outside their caste, so out of necessity child marriage was created to ensure the caste system continued. Also parents of a child entering into a child marriage are often poor and use marriage as a way to make their daughter’s future better, especially in areas with little economic opportunities.
“During times of war, parents will often marry off their young child to protect her from the conflicts raging around her. Some families still use child marriage to build alliances, as they did during the medieval ages,” Nirmal Kaur, Delhi-based child rights activist, told Gulf News.
“Statistically, a girl in a child marriage has less of a chance to go to school, and parents think education will undermine her ability to be a traditional wife and mother. Virginity is an important part of Indian culture, and parents want to ensure their daughters do not have pre-marital sex, and child marriage is an easy way to fix this,” Kaur said.
Posted by Melisende at 9:25 PM 3 comments:


The Vatican's official newspaper is for the first time in its 150-year history publishing an all-colour women's supplement "to give voice to the value that women bring to the church".
Women, Church, World will be edited by women and published withL'Osservatore Romano, the newspaper founded in 1861 and published by the Holy See on the last Thursday of every month.
The new section will promote a keener understanding of the "under-appreciated treasure" of women in the church, according to editor Giovanni Maria Vian.
The launch coincides with the worst scandal to hit the Vatican in years as leaked letters addressed to the pope expose a world of jealous, spiteful prelates and petty rivalries.
Vian said Pope Benedict backed the supplement, which he said would hire non-Catholic contributors.
Posted by Melisende at 9:23 PM No comments:


After six years of abuse, Allah Rakhi was in the process of walking out of her marriage when her husband struck once again. Snatching a knife, he sliced off her nose. “You’re no longer beautiful!” he shouted.
He then slashed at her foot - a brutal punishment for leaving the house without his permission.
“A woman is only a woman inside the home, outside she’s a [expletive]!” he yelled at Rakhi as she lay bleeding on the dusty street just outside her home.
That was 32 years ago. All that time, Rakhi hid her disfigured face under a veil. Then in March, a surgeon took up her case. He cut flesh from her ribs and fashioned it into a new nose, and in the process, has transformed her life.
Posted by Melisende at 9:20 PM No comments: 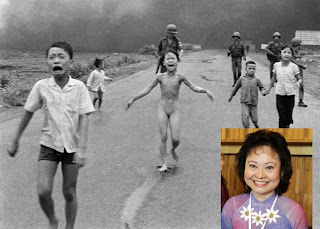 It only took a second for Associated Press photographer Huynh Cong "Nick" Ut to snap the iconic black-and-white image 40 years ago. It communicated the horrors of the Vietnam War in a way words could never describe, helping to end one of the most divisive wars in American history.
But beneath the photo lies a lesser-known story. It's the tale of a dying child brought together by chance with a young photographer. A moment captured in the chaos of war that would be both her savior and her curse on a journey to understand life's plan for her.
"I really wanted to escape from that little girl," says Kim Phuc, now 49. "But it seems to me that the picture didn't let me go."

Posted by Melisende at 9:18 PM No comments: