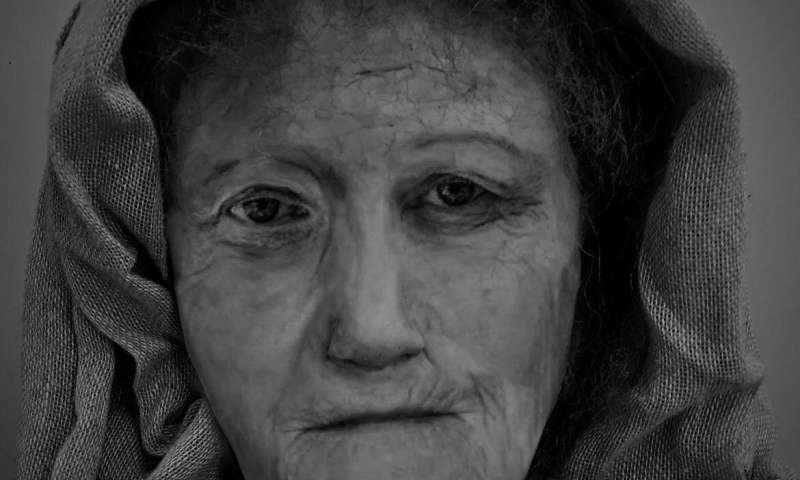 From Phys Org News:
A University of Dundee student has revealed the face of one of Scotland's oldest druids, believed to have been more than 60 years old when she died during the Iron Age.
Karen Fleming, an MSc Forensic Art & Facial Identification student, has recreated the head of a woman believed to have been from Stornoway, on the Isle of Lewis.
The 3-D wax reconstruction depicts a toothless female, nicknamed "Hilda," believed to have been well into her 60s, an impressive feat itself. Karen says Hilda, although thousands of years old, displays many physical attributes that remain recognizable today.
read more here @ Phys Org News
Posted by Melisende at 11:18 AM No comments:

Meet Whang-Od, the Oldest Tattoo Artist in the Philippines

From My Modern Met
At 102 years old, Whang-Od Oggay (who also goes by Whang-od or Maria Oggay) is helping to keep an ancient tradition alive in the Kalinga province of the Philippines. She’s the country’s oldest mambabatok, a traditional Kalinga tattooist. Each morning at dawn, Whang-Od wakes to craft a mixture of ink from pine soot and water in preparation to apply hand-tapped tattoos on the bodies of people from around the world. Although many come to see her, their journey is no small feat. Visitors make a 15-hour drive north of Manila to the mountain village of Buscalan, which is only accessible by hiking a mile from the nearest dirt road through a forest and rice terraces.
Whang-Od inks multiple tattoos a day using a few tools—a thorn from a pomelo tree, a foot-long bamboo stick, coal, and water. The handmade ink is tapped deep into the skin using the thorn and bamboo to push it in. The results are permanent motifs that range from lines to simple shapes to tribal prints to animals. Each carries meanings such as strength, beauty, and fertility.
read more here @ My Modern Met
Posted by Melisende at 3:10 PM 2 comments:

How to Silence Women

From Hindustan Times:
When classics professor Mary Beard tells the story of Tereus who, in Greek mythology, cuts off the tongue of Philomena after raping her, it is to point to a particularly grisly example of how women were silenced in ancient culture.
That culture persists. Evidence lies in a Delhi hospital where the Unnao rape survivor and her lawyer remain on life support after the car they were travelling in was crushed by a truck, killing two other women in it.
In Kerala, the Franciscan Clarist Congregation of the Catholic Church has expelled Lucy Kallappura, one of the five nuns who led the protest against bishop Franco Mulakkal, on bail on charges of raping a fellow nun. Sister Lucy’s sins? Publishing poems and learning to drive. The other four nuns have already been transferred.
From Unnao to Wayanad, the lesson is clear. Women who speak up against sexual assault are sought to be silenced by men who are backed by institutional support.
read more here @ Hindustan Times
Posted by Melisende at 2:55 PM No comments:

The Secret Life of Medieval Female Artists Discovered by Accident

From Interesting Engineering:
A religious woman living in Germany around 1100AD was likely contributing art to the richly illustrated manuscripts of the era. Analysis of her teeth plaque shows evidence of the rare and expensive lapis lazuli pigment. The research shows women may have played a bigger role in religious art than previously thought.
This may indicate the woman was a painter of these highly sought after manuscripts. The study was examining dental calculus - the plaque that fossilizes on human teeth during life - of bodies found close to the site of a women's monastery at Dalheim in Germany.
Little is known about the monastery, but a women's exclusive community may have formed there as early as the 10th century AD.
Written records indicate that a lively community present in 1244 AD. Researchers believe up to 14 religious women may have lived on site until its destruction in a fire in the 14th century.
Posted by Melisende at 2:29 PM No comments: 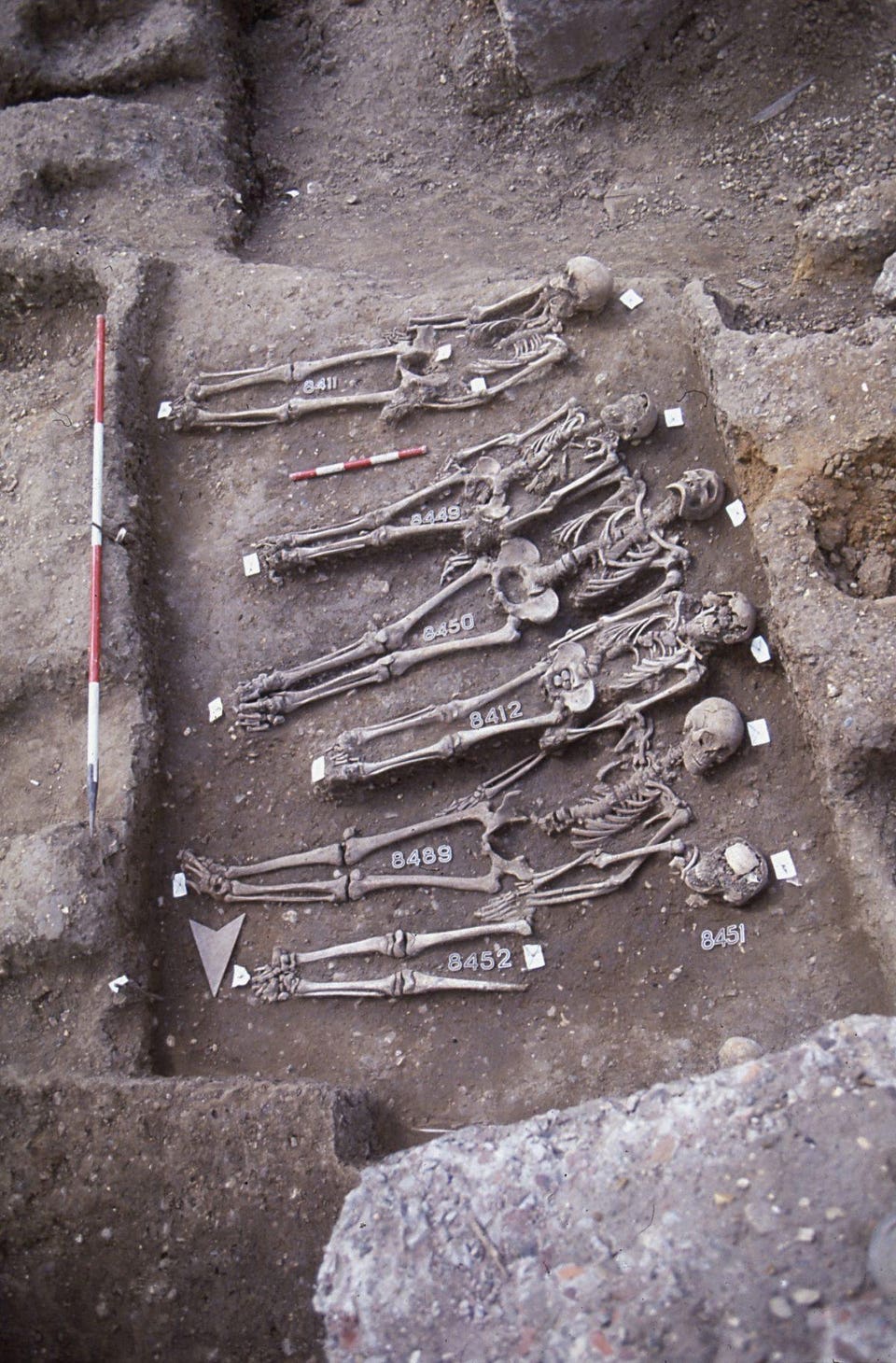 Writing in the American Journal of Human Biology, bioarchaeologist Sharon DeWitte from the University of South Carolina studied more than 800 skeletons from Medieval London with the goal of investigating "stress, sex, and plague." A bit less salacious than it sounds, the main topic covered in the research is the experience of physiological stress among members of two sexes -- male and female -- before and after the Black Death.
In examining skeletons from the 11th-12th century, the first half of the 13th century, and the mid-14th through mid-16th centuries, DeWitte calculated age-at-death from the bones and also tracked changes in the canine teeth and in the length of shin bones as a way of estimating people's health.
Using a mathematical survival analysis, DeWitte found that survivorship decreased before the Black Death but increased after it, for both males and females. That is, she found a general increase in health after the plague, explaining that "the post-Black Death demographic changes might represent a 'harvesting' effect; that is, an increase in mortality among people with compromised health."
read more here @ Forbes
Posted by Melisende at 2:20 PM No comments:

The Silkwomen of Medieval London 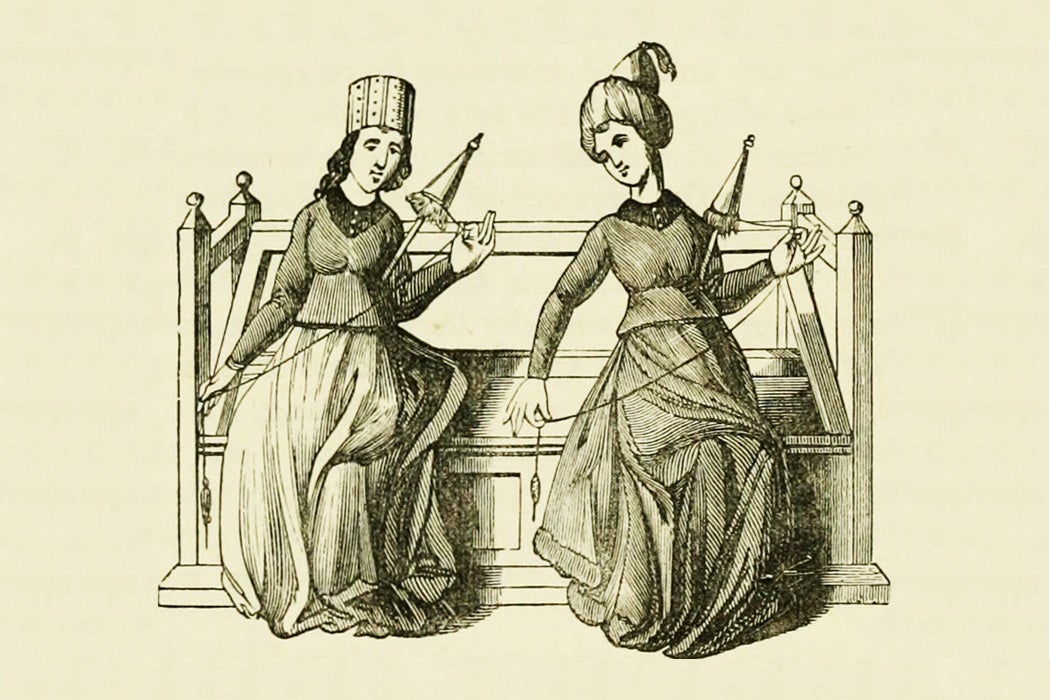 A group of skilled women ran the silk-making industry in 15th century London. So why didn't they protect their workers' rights by forming a guild?
Women’s paid work in medieval Europe was limited, to say the least. The options were essentially: domestic service, retail, midwifery, spinning, and sex work. None of these was considered skilled enough to be worthy of a guild. Guilds (also called gilds) were one of the most influential forms of organization and community in the Middle Ages. Organized around trades or crafts, guilds worked for the mutual benefit of their members. By controlling access to skills passed from master to apprentice, guilds could be a real economic and political force—and few of them allowed women members.
But there were some guilds for women. Historians Maryanne Kowaleski and Judith M. Bennett write that “the treatment of working women by medieval gilds is a complex and varied story.” Building on a historically significant article by one of the first women medievalists, Marian K. Dale, Kowaleski and Bennett argue that “gild membership allowed women to participate in some form of community life that offered its members economic security, spiritual comfort and social privilege.” Wives and daughters of male guild members, as well as widows of male members, were the most common female guild members.
read more here @ JSTOR Daily
Posted by Melisende at 2:15 PM No comments:

From ABC News:
Once upon a time, there was a wealthy woman named Maria Sophia von Erthal. Born in 1725 in the castle of the Medieval German town of Lohr am Main, she was a baroness and the sister of bishops. 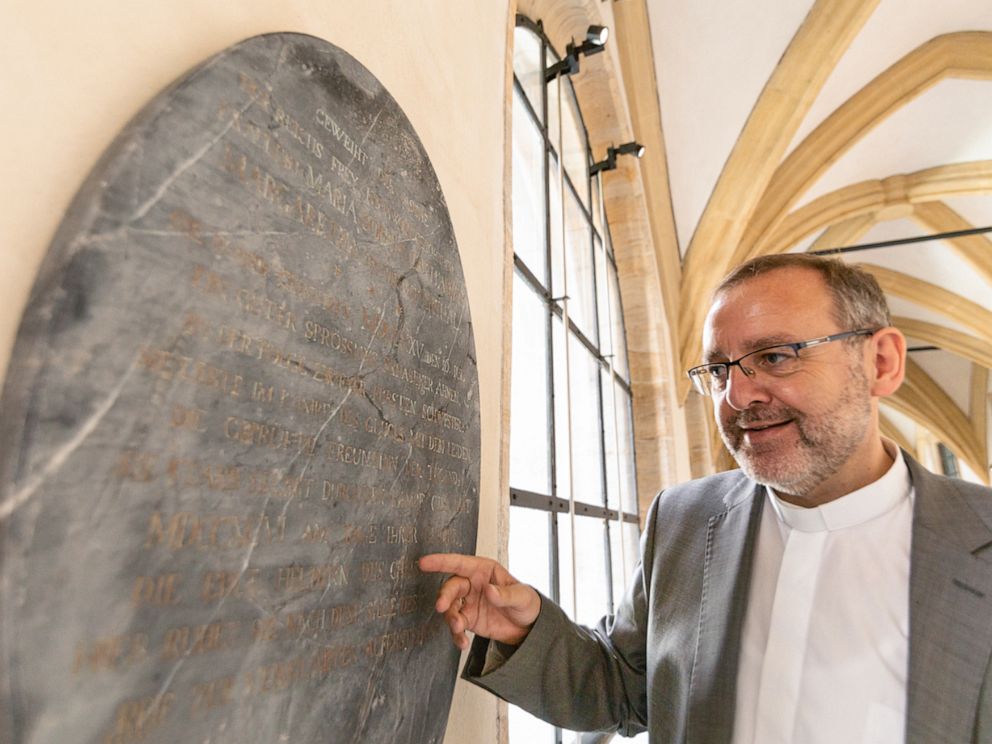 But she went on to be known culturally as the possible inspiration for the fairy tale "Snow White and the Seven Dwarfs" written by Jacob and Wilhelm Grimm in the 19th century.
Kempkens told the BBC that there are "indications" that von Erthal was the model for Snow White.
"Today when you make a film about a historic person there is also fiction in it. So in this case I think there is a historic basis, but there are also fictional elements" he told the network.
Von Erthal's life did not have an overtly romantic ending. She became blind in her youth and died at the age of 71 in a monastery in Bamberg, according to the museum.
At the time, women did not typically get their own gravestones, which makes von Erthal's historically significant, whether or not she inspired the fairy tale, points out the museum.
Posted by Melisende at 2:08 PM No comments:

Marian statue may be medieval

From Church Times:
The most famous Marian image in medieval England, which was believed to have been burned in the 16th century, could be safe and sound at the Victorian and Albert Museum, two historians have said. 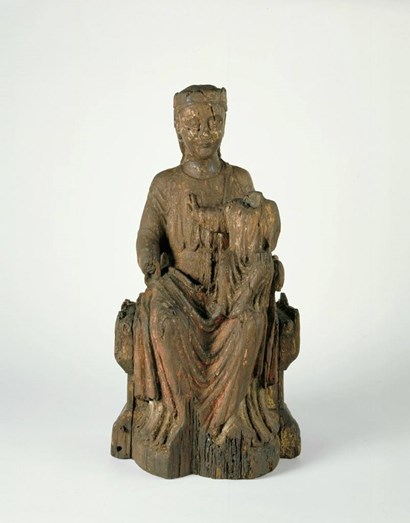 The image of Our Lady of Walsingham — a simple wooden statue that stood beside the altar of Walsingham’s Holy House — was believed to have been burned in 1539, in London, either in the courtyard of Thomas Cromwell’s house in Chelsea, or at Smithfield.
But it has long been recognised that a 13th-century statue of the Madonna and Child at the V&A, known as the Langham Madonna, bears a striking resemblance to the image of Our Lady of Walsingham on the priory seal.
In 1931, six years after it was acquired by the museum, Henry Joy Fynes-Clinton, one of the founding guardians of the Anglican Shrine at Walsingham, wrote in The Tablet of the discovery of a carved wooden figure “in an old house near Walsingham”. It could be a copy of the Walsingham image, he suggested, or even the original, “saved perhaps as other relics and holy things, by means of substitution being made for the purposes of satisfying the desecrators”.
read more here @ Church Times
Posted by Melisende at 1:43 PM No comments:

The wealthy widow who made her mark in medieval England

From The Jewish Chronicle:
Among the many disasters associated with the fast of Tishah b'Av is the expulsion of English Jewry.

Licoricia was a remarkable Jewess, both because of her love life and her business dealings. But whereas that may apply to many a Jewish woman today, she stands out as being one of the few of whom that could be said in medieval England.
Her story also epitomises the prosperity and gradual decline of the Jewish community, which culminated in one of her sons being hanged and the others banished in the expulsion of the Jews from England, one of the many tragedies connected with Tishah B’Av, which begins next Saturday evening.
The story of the Jews as a settled community starts after William I conquered England in 1066 and invited them over to help colonise his new kingdom.
This was the core factor behind both their rise and downfall: on the one hand they had the king’s protection; on the other hand, they were seen as interlopers, both foreign and the king’s agents. They were also of a different faith in a society where there was only one right faith.
In addition to this toxic mix, many Jews were moneylenders. This was because Christians were banned by canon law from offering loans with interest and so there was a vacuum in society. It enabled many Jews to make a living, but it came at the high cost of unpopularity when the debtors faced mounting interest, or could not repay their loans and had to forfeit their deposits.
This was the world into which Licoricia was born. We are not sure when, or where, but thanks to the painstaking research of the late Suzanne Bartlet, we know that she first appears in 1234 as a young widow, known as Licoricia of Winchester.

Posted by Melisende at 1:41 PM No comments: