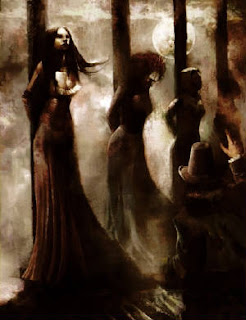 From the Herald Sun:

A GERMAN witchcraft trial is set to reopen after almost 400 years, in a bid to clear the name of a woman who was burned at the stake in 1627.
Katharina Henoth was head of the post office in Cologne, western Germany, when she was charged with witchcraft, tortured and eventually sentenced to death, despite her protests of innocence, the Kolner Stadt-Anzeigerreported.
She was accused, among other things, of causing the illness and death of several people, but it is thought the charges brought against her may have been politically motivated.
See also:
Katharina Henoth on wikipedia
The European Witch Hunts

Posted by Melisende at 9:53 PM No comments:

From the Daily Telegraph:


SOME 3000 people suspected of witchcraft, mainly old women, were lynched in Tanzania from 2005 to 2011, a leading local rights group said today.
"Between 2005 and 2011 around 3000 people were lynched by frightened neighbours who thought they were witches," the Legal and Human Rights Centre (LHRC) said in a report.

"On average 500 people... particularly old women with red eyes, are killed every year in Tanzania because they are suspected of being witches," the report said.

The provinces hardest hit are Mwanza and Shinyanga in the north of the country, LHRC said.

"In Shinyanga province for example 242 people were killed because of local beliefs in witchcraft between January 2010 and January 2011 alone," it said.

The rights group explained that red eyes are feared as a sign of witchcraft, even if they in fact often result from the use of cow dung as cooking fuel in impoverished communities.

From We:news:
Japanese officials are trying to remove a small monument to Korean "comfort women" in New Jersey. Rochelle Saidel says these and other women violated by war are still being denied official recognition.

In the early 1990s, Kim Hak Soon was the first former comfort woman to speak out, at the age of 67, and her testimony inspired other women to do the same. Within one year more than 200 other Korean women who had been enslaved as comfort women came forward. They have joined together, supported each other and shared their experience.


Posted by Melisende at 9:30 PM No comments:


For decades they were denied the top executive jobs in American corporations, but now women (as of mid-May 2012) run 18 of the Fortune 500 companies, among the nation's biggest. Twenty-one women CEOs also run companies in the Fortune 501-1000 category. Despite this narrowing of the gender gap at the top of the executive pyramid, women still only account for a small percentage of CEOs in America's largest corporations. Those women who have ascended to the top job, however, have been successful in running their respective companies.

Posted by Melisende at 9:27 PM No comments: 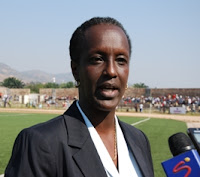 Nsekera, 45, is the only woman in charge of a national federation thanks to her role as president of the Burundi Football Federation (FFB) and was already a member of FIFA committees for women's football, the women's World Cup and the organising committee for Olympic football tournaments.

This latest appointment is just the next step in Nsekera's groundbreaking career.

Her rise to prominence has been remarkable -- she took over the running of a garage left to her by her husband after his death in 2003 before breaking into the "terribly macho" world of Burundian football.

Posted by Melisende at 9:24 PM No comments:

Fear Of Reprisals Over "Saving Face"


Sharmeen Obaid-Chinoy made history earlier this year when she won Pakistan’s first Oscar, feted across the country for exposing the horrors endured by women whose faces are obliterated in devastating acid attacks.
Her 40-minute film focuses on Zakia and Rukhsana as they fight to rebuild their lives after being attacked by their husbands, and British Pakistani plastic surgeon Mohammad Jawad who tries to help repair their shattered looks.
When “Saving Face” scooped a coveted gold statuette in the documentary category in Hollywood in February, campaigners were initially jubilant.
The Acid Survivors Foundation Pakistan (ASF) had cooperated on the film but some survivors now fear a backlash in a deeply conservative society — and are taking legal action against the producers.
Posted by Melisende at 9:31 PM No comments:

From the Independant:
Nowadays, it seems incredible that women should have had to hide their 'shame' – a Victorian word still in common currency in the 1950s – in such forbidding institutions, austere relics of 19th-century workhouses and 18th-century penitentiaries. Even worse were the cases of unmarried mothers discovered in mental asylums in the 1970s, having been incarcerated there for decades, thanks to the post-war influence of such notorious experts as the child psychiatrist John Bowlby who condemned "the neurotic character" of the "socially unacceptable" unmarried mother.

The turnover at Birdhurst Lodge was brisk, with each woman's stay limited to three months: six weeks before the birth and six weeks afterwards. The timing was partly to give the mothers a chance to bond with their babies before deciding whether to have them adopted, but also a calculated move to let enough time elapse to make sure the babies were developmentally healthy, since adoptive couples did not want disabled children. The official stigma surrounding illegitimacy, together with queues of childless couples wanting to adopt in the days before fertility treatment, meant that the mother-and-baby homes that were widely established in Britain between the two world wars by the main churches and the Salvation Army were seen to be neatly solving two societal problems at once: they effectively operated as baby farms. And of course it made economic sense, since the adoptive parents would donate money to the religious charities running such homes.

Women From the Ankle Down

From the Wall Street Journal: 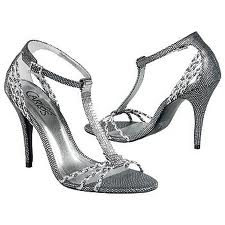 Rachelle Bergstein's "Women From the Ankle Down" traces this quest through the lives of American women over the past 100 years. Ms. Bergstein, a first-time author and self-described shoe obsessive, claims that if you look at the shoes women wore—or aspired to wear—you'll understand who they were. In an effort to prove this, she takes us on a zigzagging tour through well-trodden history.
The start of the 20th century, Ms. Bergstein tells us, was a sad time for both women and their footwear. Most shoes were still stitched by hand, so there were just a few styles, mostly in black, brown and white. Cobblers had only recently started using different patterns for left and right feet. Only the very rich owned more than a few pair. A poor woman could expect to wear the same two shoes all of her adult life.
Posted by Melisende at 1:15 PM No comments: 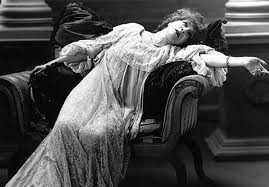 Hysteria deals with a rather dark period in women's history, and especially that of the medical profession. Set in 1880 Victorian London, where doctors still rely on blood sucking leeches as a regular form of treatment, medical science was even more clueless when it came to the care of women. It didn't help that health care was basically an all boy's club, and that guys knew even less about females than we do now, which is still extraordinarily little. Women were thought to be joyless, sexless creatures. It was either that or they were promiscuous lunatics needing to be institutionalized. There was no middle ground. So when it came to women dealing with common issues like depression, anxiety, or discontentment, guys just conjured up a catch-all by labeling it "female hysteria".


A woman yesterday took command of a frontline warship for the first time in the Navy’s 500-year history.
Commander Sarah West, 40, is now in sole control of HMS Portland, a Type 23 frigate and its mostly male crew of 185.
And it could be just the start as senior Navy sources said last night that three more war vessels will be commanded by women by the end of this year.
Cmdr West will have her own cabin and steward on HMS Portland, but will dine alone each night unless invited to join other officers.
She joined the Navy in 1995 with a degree in maths.
After training as a warfare officer, she served on HMS ­Sheffield in the Middle East and joined the task force that dramatically helped in the evacuation of thousands of Britons from Beirut in 2006.
Posted by Melisende at 12:07 PM No comments: 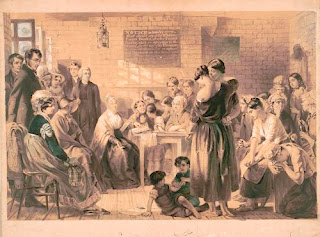 Tasmanians are being given a new opportunity to explore the compelling but brutal history of female convicts in Tasmania’s northern midlands.

A $240,000 interpretation and conservation project at the Ross Female Factory has been completed, after almost three years.

The Minister for Environment, Parks and Heritage, Brian Wightman, said the ‘Ross Community and the story of Convictism’ project was made possible through the Tasmanian Community Fund.

The site was originally used to accommodate male convicts for hire. However, it’s particularly significant for the period between 1847 and 1854, when it was one of only five workhouses, or ‘female factories’ used for female convicts in Tasmania.

“The Ross Female Factory is a nationally significant site in the story of female convictism,” Mr Wightman said.

“Of 74,000 convicts transported to Tasmania, about 12,500 were women. At some point, most of them were incarcerated in one of the five ‘factories’,” he said.