Victoria Woodhull - Candidate For US President

From: The Times Leader:


Nearly a century and a half before Hillary Clinton, a fiery activist from Ohio became the first woman nominated for U.S. president. 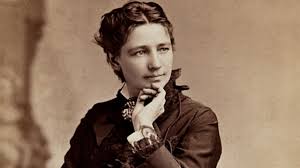 Victoria Woodhull’s varied and colorful life makes her difficult to pigeonhole. The suffragist, medium, businesswoman, stockbroker and newspaper publisher was “Mrs. Satan” to some, a visionary champion of women’s and children’s rights to others.

She rode motorcycles, preached “free love” and followed the guidance of an ancient Greek orator she believed had presented himself to her as a spirit guide.

The Equal Rights Party nominated Woodhull to face incumbent Republican Ulysses S. Grant in 1872 and Democrat Horace Greeley, nearly 50 years before women had the right to vote. At 34, she was a few months shy of the required age, but most historians still view her nomination and run as the first.

Woodhull lost, of course, but by how much is unclear.

Read rest of article here at The Times Leader

Posted by Melisende at 3:44 PM No comments:


Archaeologists in Peru have found more than a dozen tombs suggesting human sacrifice at sprawling ruins on the northern coast, a seat of power for three ancient cultures and the possible center of a pre-Inca legend. 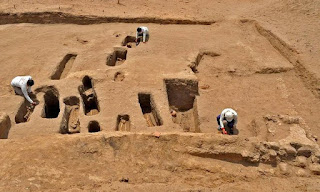 At Chotuna-Chornancap, a coastal ruin complex in the arid valleys far north of Lima, archaeologists with Peru’s ministry of culture found more than 17 graves dating to at least the 15th century.

“There is at least one fairly high-status tomb,” said Haagen Klaus, a bioarchaeologist at George Mason University has worked at Chotuna-Chornancap before. Klaus told the Guardian that he hopes to analyze the new finds, discovered by the ruins of a temple, to confirm whether the victims were sacrificed.

“It’s not unusual that sacrifices are made to those individuals, sometimes during the funeral or even years or generations afterward,” he said. “But we can see that a number of the individuals that were buried were children – and that does fit into the larger pattern of ritual sacrifice.”

Continue reading article here at The Guardian and also at Seeker

Posted by Melisende at 4:42 PM No comments:

An obituary 1,700 years old has been translated

An obituary 1,700 years old has been translated - CNN.com 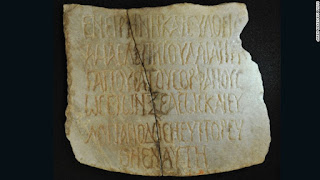 A 1,700-year-old obituary, which is unlike anything researchers say they have seen before, has finally been translated. The inscription, written in ancient Greek on a small limestone tablet reveals a woman's name, her religion and what she was like as a person.

Lincoln H. Blumell, who specializes in ancient scripture at Utah's Brigham Young University, translated the epitaph. Plucked from Egypt, the document had been sitting in the Rare Books Department at the University of Utah's J Willard Marriott Library since it was donated in 1989. It commemorates a woman named Helene who cared for and loved orphans.

In peace and blessing Ama Helene, a Jew, who loves the orphans, [died]. For about 60 years her path was one of mercy and blessing; on it she prospered.

Women in History - All China Women's Federation
Series of articles of women who have made an impact on the history of China throughout the ages.  Link forms part of the Women of China website.

Posted by Melisende at 4:01 PM No comments:

What Not To Wear: A Short History Of Regulating Female Dress

What Not To Wear: A Short History Of Regulating Female Dress From Ancient Sparta To The Burkini

“Let’s keep in mind that it is no more freeing to tell a woman what she can wear than to tell her what she can’t.”

Few can deny that the various burkini bans put in place by towns on the French Riviera this summer have become symbolic of thecountry’s struggle over “secular identity.” The bans have seemed particularly odd to Italian beachgoers and others around the world, who have pointed out that nuns are often seen on Italian beaches in their habit. Despite the French Conseil d’Etat’s suspension of the burkini ban, local mayors continue to say they will enforce the dress code. Cogolin Mayor Marc Etienne Lansade told CNN, ”if you don’t want to live the way we do, don’t come...If you are accepted in Rome — do like Romans do.”  As it turns out, there is an ancient history of telling women what they can and cannot wear as a means of controlling a community’s political message.

Posted by Melisende at 2:17 PM No comments: