From Art Critique:
A new discovery of an ancient burial site shows just how much we still don’t know about ancient societies. A 9,000-year-old burial site in southern Peru potentially shows that what we’ve longed believed about gender roles in hunter-gatherer societies might be a bit off.
Anthropology professor Randall Haas and a team of experts have published a report that “challenge[s] the man-the-hunter hypothesis” concerning the division of work amongst males and females in ancient times. Published in Science Advances, the study titled “Female hunters of the early Americas” builds upon the discovery of remains and more than 20,000 artefacts in the Andean highlands at a 9,000-year-old burial site called Wilamaya Patjxa.

The study points out that in recent hunter-gatherer societies, big-game hunting has been “overwhelmingly male-biased.” But, Haas and his team have shown evidence from Wilamaya Patjxa that this may not have always been the case amongst ancient societies that would have required all-hands-on-deck to procure big-game. In addition to communal hunting, Wilamaya Patjxa findings suggests that child rearing would have been a shared task, freeing up more men, women, and children to partake in hunts.
read more here @ Art Critique
Posted by Melisende at 7:52 PM 2 comments:

From Indian Education Diary:
More than analyzing textual and linguistic structures and interpreting ancient writings, Philology as a human science can surprise us and reveal “existing layers of a society” from the past. This was the case in a study that transcribed “Letters of Dates”, a kind of land deed, from Jundiaí, in the middle of the 17th century. At the time, amid requests for possession, widowed, married and single women they were among the “supplicants” of extensive areas, addressed to the public power of the city. The ancient manuscripts (1657), which date from the colonial period, are now filed at the Memory Center of the municipality of Jundiaí, in the interior of the State of São Paulo, and were the object of study by researcher Kathlin Carla de Morais, from the Faculty of Philosophy, Letters and Human Sciences (FFLCH) from USP.
According to the study, this intertwining of religious, political and cultural powers can be explained in this period by the fact that the city councils were the regulators of everything that happened in the region. The guidelines they followed were inspired by sources from the Portuguese judicial system, which dealt with the State’s relations with the Church and guided civil and commercial processes, based on Roman and canon law. This land concession scheme lasted until the 19th century with the Land Law (1850), which started to use the purchase and sale model for the acquisition of floors.
read more here @ Indian Education Diary
Posted by Melisende at 7:45 PM No comments:

From La Prensa Latina Media:
Peruvians’ view of their remote ancestors has taken on a new immediacy thanks to the innovative reconstruction of the face of an upper class women buried some 3,700 years ago.
“She has a great resemblance to a woman of today,” archaeologist Dayanna Carbonel told Efe, referring to the “Lady of El Paraiso,” whose tomb was discovered in 2016.
Carbonel leads the team carrying out excavations at the vast El Paraiso complex, home to the oldest known temples on the central coast of what is now Peru. 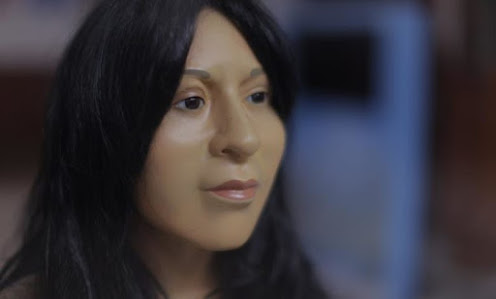 The bust, with its long face, prominent nose and cheekbones, small eyes and narrow mouth, is on display at Lima’s Andres Del Castillo Mineral Museum, which financed the reconstruction and gave Efe an exclusive first look at the result of nearly two years’ work.
Anthropometric analysis of the skeletal remains provided a basis for determining the dimensions and shape of the face of the Lady of El Paraiso, who stood just 1.5m (4ft 9in) tall and was between the ages of 20 and 25 at her death.
read more here @ La Prensa Latina Media
Posted by Melisende at 7:40 PM No comments: