The Most Prolific Female Assassin in History 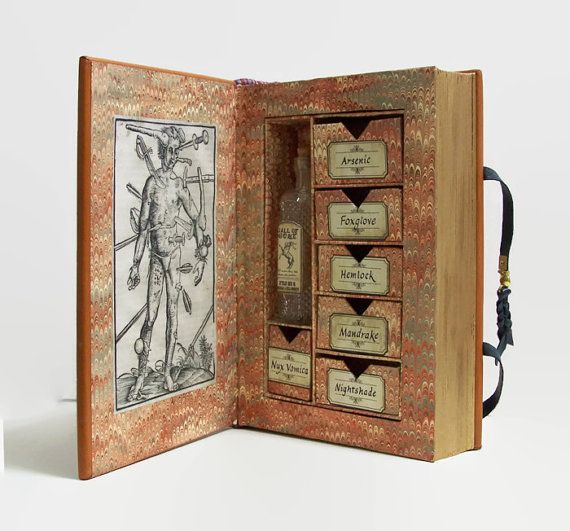 Born in Palermo, Italy, she was reputedly very beautiful, as was her mother, although there are no known portraits of her. A History of Mystery says that she was probably the daughter of Thofania d’Adamo, who was executed in 1633 for killing her husband.
What is known is that Giulia was a professional poisoner, helping unhappy women get early “divorces,” and by the time she was executed in 1659, she was said to have been responsible for the deaths of over 600 men.
read more here
@ The Vintage News
@ Guilia Tofana - wikipedia
@ Aqua Tofani - Mike Dash History
@ Toxicology in the Middle Ages and Renaissance edited by Philip Wexler
@ Giulia Tofana by Adrianna Assini (historical fiction)
Posted by Melisende at 4:30 PM 1 comment:

In Egypt have discovered the remains of an ancient "Princess"

During the work in the tomb of Karbacken in the floor was discovered a half-meter square hole with a “secret”.  American scientists have found ritual vessels with the bodies of noble women.
They found several canopic jars in the tomb of the high priest of Amun. According to the Ministry of Affairs of antiquities of Egypt the remains belonged to a woman since that last days of independence Ancient Egypt.
As the head of an American archaeological expedition to El-Asifa, Elena Pischikova, all the canopy is made in the style of the 26th dynasty and all have the inscription “to the lady of the house of Amenirdis”. In addition, the canopy contain a sufficient amount of resin, although the flood has damaged a large part of their content.
Note: There were two notable women in Egypt with the name "Amenirdis: one was Amenirdis I (daughter of Pharaoh Kashta) and the other was Amenirdis II (daughter of the Kushite pharaoh Taharqa). Confusingly, both were Priestesses of Amun and daughters of Pharaohs.
read more here
@ God's Wife, God's Servant: The God's Wife of Amun (ca.740–525 BC) by Mariam F. Ayad
@ The Double Kingdom Under Taharqo: Studies in the History of Kush and Egypt c690 - 664 BC by Jeremy W. Pope
@ History of Ancient Egypt - God's Wife of Amun
Posted by Melisende at 3:50 PM No comments:

Let's go back to 2012 when news of a tattooed Siberian princess made headlines. A brief recap:

Siberian Times - 14th August 2012:
The ancient mummy of a mysterious young woman, known as the Ukok Princess, is finally returning home to the Altai Republic this month. She is to be kept in a special mausoleum at the Republican National Museum in capital Gorno-Altaisk, where eventually she will be displayed in a glass sarcophagus to tourists. For the past 19 years, since her discovery, she was kept mainly at a scientific institute in Novosibirsk, apart from a period in Moscow when her remains were treated by the same scientists who preserve the body of Soviet founder Vladimir Lenin.

Siberian Times - 28th August 2012
Archeologists even found items from her 'cosmetics bag', which lay inside her coffin next to her left hip, notably a face brush made from horse hair, and a fragment of an 'eyeliner pencil'. This was made from iron rings, inside which was vivianite, giving a deep blue-green colour on the skin.  There was also vivianite powder, derived from an iron phosphate mineral, apparently to be applied to the face. 'Analyses showed that the Pazyryk women knew and used the natural mineral blue colour called vivianite and they also produced quite complicated fat-based facial masks to protect the skin from extreme climates of high mountains.'

Siberian Times - 20th September 2012
Known as Princess Ukok, she will be put on public display in a specially-built glass sarcophagus in Gorno-Altaisk, capital of the republic covering the Altai Mountains. Locals hope her tattooed remains - as well as her possessions including an ancient make-up bag - will become a significant tourist attraction at the Republican National Museum in a spectacular mountain region seeking to attract far more Russian and foreign visitors.

Siberian Times - 8th March 2014
Her ancient tattoo is a showpiece of the glittering opening ceremony for the Sochi Paralympics. The tattoo featured in Sochi was from her left shoulder. It shows a mythological animal, a deer with a griffon's beak and a Capricorn's antlers. The antlers are decorated with the heads of griffons. And the same griffon's head is shown on the back of the animal'.

Siberian Times - 21st August 2014
But local peoples from the Altai Republic, which borders Kazakhstan and Mongolia, have long objected to the fact that her burial mound was disturbed. They were also angered by a decision, after 19 years of academic research into her remains, to put her on display in a glass sarcophagus in a local museum.  Ancient beliefs say that the mummy's presence in the burial chamber was 'to bar the entrance to the kingdom of the dead'.  By removing this mummy, also known as Oochy-Bala, the elders contend that 'the entrance remains open'.  'Today, we honour the sacred beliefs of our ancestors like three millennia ago,' said one elder. 'We have been burying people according to Scythian traditions. We want respect for our traditions'.

Siberian Times - 14th October 2014
Now Siberian scientists have discerned more about the likely circumstances of her demise, but also of her life, use of cannabis, and why she was regarded as a woman of singular importance to her mountain people.  Her use of drugs to cope with the symptoms of her illnesses evidently gave her 'an altered state of mind', leading her kinsmen to the belief that she could communicate with the spirits, the experts believe.

The MRI, conducted in Novosibirsk by eminent academics Andrey Letyagin and Andrey Savelov, showed that the 'princess' suffered from osteomyelitis, an infection of the bone or bone marrow, from childhood or adolescence.  'When she was a little over 20 years old, she became ill with another serious disease - breast cancer. It painfully destroyed her' over perhaps five years, said a summary of the medical findings in 'Science First Hand' journal by archeologist Professor Natalia Polosmak, who first found these remarkable human remains in 1993.

Siberian Times - 25th May 2015
Elders in the region where a tattooed princess was found preserved in permafrost have re-sent a petition to Vladimir Putin demanding she be immediately reinterred. They say that since her removal the area has been hit by a series of natural disasters and insist a reburial would 'stop her anger that caused floods and earthquakes'.  Ancient beliefs dictate that her presence in the burial chamber had been to 'bar the entrance to the kingdom of the dead'. Scientists say she lived more than 2,500 years ago, meaning she was alive five centuries before the birth of Christ.

Siberian Times - 3rd February 2016
An appeal will be launched after a court this week rejected a demand by the the leader of the Teles ethnic group in the Altai Mountains to order the reburial of the world famous tattooed remains of 'Princess Ukok', dug from her tomb in 1993 by leading Russian archeologists.  Akai Kine, leader of the Teles ethnic group and president of the Spiritual Centre of the Turks, Kin Altai, demanded that the 'archeological complex' Ak-Alakha-3, where the mummy was found on the Ukok Plateau, should be recognised as a cultural heritage monument and the remains of the 'ice princess' classified as an integral part of the tomb. The 'integrity' of the burial site should be restored before her 2,500 year old remains should be reburied.

Siberian Times - 3rd June 2016
The well-preserved 25 year old woman - who probably died from breast cancer - was dug from her ice-clad tomb in 1993 by Russian archeologists, but this is the first time her remains will be publicly displayed.  The move to display the mummy in the Anokhin National Museum in Gorno-Altaisk is seen as controversial, even though the remains in a specially built sarcophagus will be viewed only twice a week for a maximum of three hours on each day to ensure she is not damaged. Earlier museum officials appeared to give assurances she would not be displayed.

A bit of a flashback to 2015 when reports came through of the discovery of an ancient amazon warrior princess in Kazahkstan. Here is a brief recap:

The Week:
The skeleton of an ancient female warrior has been uncovered in south Kazakhstan, startling archaeologists whose 23 years of research in the region had never found records or hints of women soldiers in the region. The remains, which are perfectly preserved according to The Telegraph, are believed to belong to a woman based on the skull's shape and size — despite the huge sword and dagger found alongside her body.

Daily Mail:
The remains of an ancient female warrior still clasping a huge sword and dagger have been discovered in South Kazakhstan. Dubbed Red Sonja after the fearsome warrior woman portrayed by Brigitte Nielsen in the hit 1980s film, the skeleton was found with an impressive arsenal of weapons.  The remains, which are perfectly preserved, are thought to be thousands of years old and could date back as early as 200BC.

News:
A dagger. Arrows. Not exactly what you’d expect in a woman’s grave from 1600 years ago. Unless she was an Amazon. The woman’s remains and the grave goods she was buried with — which includes finely crafted pots and bowls — will soon be put on display in the National Museum of Kazakhstan.  The sword was laid alongside her body, close to her left hand. The dagger was interred close to her right hand.  Archaeologists from Russia’s Institute of Archaeology determined the skeleton belongs to a woman through the size and shape of the skull.

Ancient Origins:
The skeleton of a woman who lived more than 1,600 years ago and who was buried with a sword, a dagger, arrows, and pottery has been unearthed in Kazakhstan. Archaeologists say she was probably a high status person among the Kangyuy people, nomads who lived near the Syr Darya River and the Aral Sea in the southern steppes. The incredible discovery is the first evidence that women of the Kangyuy went to war.   The fact the warrior woman was buried with pots and bowls indicates she was an elite member of society who had some material wealth, says an article in The Telegraph . Researchers said she lived between the 11th century BC and the 4th century AD and determined her sex by the shape and size of her skull.

Gizmodo:
Archaeologists working in Kazakhstan have uncovered the remains of an ancient female warrior who lived sometime between the 11th century BC and 4th century AD.  Researchers from Russia’s Institute of Archaeology identified the remains as female by analyzing the shape and size of the skull. Other graves of warrior women have previously been found in the Eurasian Steppe, but this is the first one discovered in Kazakhstan.

Posted by Melisende at 12:39 PM No comments: