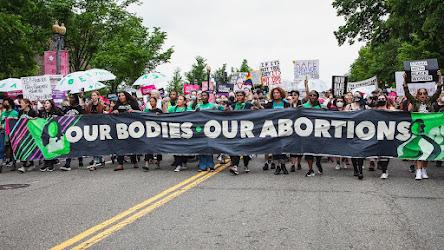 Through this ruling, the Supreme Court will force an unknowable number of people to choose between either traveling hundreds or perhaps thousands of miles for care, or remaining pregnant.
Make no mistake: This decision goes beyond abortion. This wrongful ruling is about power and control. What rights will this court take away next? Who has power over you, who has the authority to make decisions for you, and who can control how your future is going to be? It goes against the will of the American people and overturns nearly 50 years of precedent.
A Shameful Day
We’re outraged — and ready to fight like hell.
Everyone’s body is their own, and theirs alone. You must have the freedom and power to control your body and life. That means no judge, no politician, no ban should ever block your personal medical decisions or set the course for your life. Abortion access should not be based on your ZIP code, income level, or immigration status.
Abortion bans do the most harm in Black, Latino, and Indigenous communities and other communities of color, which already face barriers to health care and economic opportunity because of this country's legacy of systemic racism and discrimination. The court's ruling will add further insult to health disparities that have long plagued too many communities.
We’re Fighting Back
We vow this: The Supreme Court’s shameful decision won’t stop us. We will rebuild and reclaim the freedom that is ours.
It’s already crystal clear that these politicians plan to completely end access to abortion, one state at a time. For decades, narrow-minded politicians have built a coordinated strategy toward this moment. And politicians aim to outlaw abortion across the United States, no matter where you live. Texas and Mississippi are just the opening fronts in a campaign to destroy abortion access across the country.
Generations before ours fought tirelessly to gain and protect our rights. With this ruling, the next generation will have fewer rights — unless we fight on. Every day in every way, all of us must stop at nothing to make sure people have access to the essential health care they need to control their bodies and build their futures.
This is far from over. We have strength in numbers and power in our united voices.
Posted by Melisende at 1:01 PM