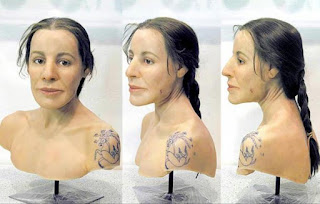 An ancient wealthy young woman was found laid to rest with her horse and weapons by workers who accidentally dug up her burial mound.
The excavator smashed the prehistoric ceremonial burial chamber in the Altai Mountains, wrecking the grave of a suspected the grave of a suspected 16 to 20-year-old combatant from the colourful Pazyryk culture.
Local culture heritage official Dr Vasily Oinoshev said: 'Only the human head and upper part of the horse remained intact in the burial ground. Unfortunately, the rest was destroyed by heavy machinery.
'Apparently, this was a young woman, judging by the teeth. All of them are intact and in good condition. We attribute her to Pazyryk culture, and we have preliminarily dated the burial as being 2,500 years old.'
Posted by Melisende at 8:11 PM