Twelve Rooms of the Nile 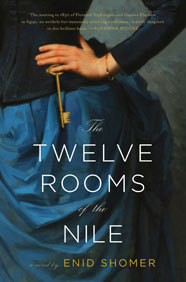 “To speak the names of the dead is to make them live again.” –The Book of the Dead

There is no more apt way to introduce celebrated poet and short-story author Enid Shomer’s debut novel, The Twelve Rooms of the Nile. While Gustave Flaubert and Florence Nightingale really did both travel through Egypt before they became the luminaries known to history, only in Shomer’s richly envisioned world did their journeys come to a crossroads, and did their lives become intertwined and their souls deeply connected. Shomer supplements rigorous research with vivid imagination, so that by the end of this novel, it will be difficult to fathom how Flaubert and Nightingale became the people we remember them as today without this story having taken place.

Enid Shomer won the Iowa Fiction Prize for her first collection of stories and the Florida Gold Medal for her second. She is also the author of four books of poetry. Her work has appeared in The New Yorker, The Atlantic, The Paris Review, and many other publications. She lives in Tampa, Florida.

Posted by Melisende at 9:58 PM