Since portraying Mary Crow Dog in the Television production of Lakota Woman: Siege at Wounded Knee, depicting the Wounded Knee Standoff, Golden-Globe winning Alaska Native actress has appeared in a vast segment of Hollywood’s finest productions. From her beloved character Suzy Song in Smoke Signals to her voice work in Disney’s Pocahontas, Bedard has proven that a Native actress can make it to the big screen and then some.

In July of 2012, Bedard co-starred in Colonial Williamsburg’s production of “The Beloved Woman,” with actor Wes Studi. During a rehearsal break, she took a few moments to speak with ICTMN about working with Studi, working as a Native actress and what’s to come in the future. 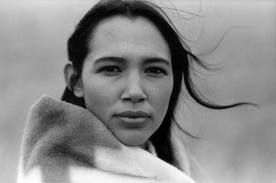 Posted by Melisende at 9:14 PM