From The Independent:
Can you name a female scientist from history? Chances are you are shouting out Marie Curie. The twice Nobel Prize-winning Curie and mathematician Ada Lovelace are two of the few women within western science to receive lasting popular recognition. One reason women tend to be absent from narratives of science is because it’s not as easy to find female scientists on the public record. Even today, the numbers of women entering science remain below those of men, especially in certain disciplines. A-level figures show only 12 per cent of candidates in computing and 22 per cent in physics in 2018 were women.
Another reason is that women do not fit the common image of a scientist. The idea of the lone male genius researcher is remarkably persistent. But looking to history can both challenge this portrayal and offer some explanation as to why science still has such a masculine bias.
Yet, scientific women worked through the cracks. Between 1880 and 1914, some 60 women contributed papers to Royal Society publications. And some women continued to work as scientists without pay or titles.
read more here @ The Independent
see also:
@ The Smithsonian - Women Who Shaped Science
@ Ranker - Famous Female Scientists
@ Wikipedia - Women In Science
Posted by Melisende at 1:36 PM No comments: Links to this post

Jane Squire - The Lady of the Longitude

The University of Cambridge:
Three hundred years ago, the British Parliament famously established rewards and funding for improved methods of finding longitude at sea. The 1714 longitude rewards of up to £20,000 (worth at least £1.5 million in today’s money) attracted diverse intellectuals, inventors, entrepreneurs and daydreamers to develop schemes. These financial incentives rejuvenated the centuries-old ‘search for the longitude’, which had begun to seem hopeless.

Cambridge University historian Dr Alexi Baker has researched the fascinating story of Jane Squire, the only woman to participate openly in the search for longitude. Earlier historians dismissed Squire as ‘nutty’ or ‘strange’ but Baker’s pioneering research reveals a fascinating individual whose life sheds new light on the search for longitude. Squire’s experiences also illuminate the roles played by gender, class and religion in early science and mathematics.
However, Squire is the only woman known to have pursued the longitude without concealing her gender. Her complex and educated (if impractical) scheme drew the attention of learned and influential individuals, from the female intellectuals known as ‘bluestockings’ to the Pope.
read more here @ University of Cambridge and @ The Clements Library Chronicles
Posted by Melisende at 4:39 PM No comments: Links to this post

From Global Indian | indiawest.com:
Indian women have the highest rate of suicide in the world, committing more than one out of three worldwide, noted a new study published by Lancet Public Health (October issue) and reviewed by Scientific American in its December issue.
The Lancet Public Health study was written by Indian American Rakhi Dondana, a clinical professor in the department of global health at the University of Washington. Dondana and her colleagues analyzed data from the Global Burden of Disease study to determine suicide death rates in India from 1990 to 2016.
About 230,000 women in India annually die from suicide, concluded Dondana. Her results are much higher than the National Crime Records Bureau of India, which determined – for 2015 – that there were 10.6 suicides per 100,000 residents of India, which is lower than the global average of 11.4 suicide deaths per 100,000 people. The NCRB determined there were 133,623 suicides in India in 2015, much lower than Dondana’s estimates. Under-reporting and mis-classification of suicide deaths in India are common, noted the researchers, attempting to explain the wide disparity between their data and that of the NCRB.
read more here @ India West
Posted by Melisende at 4:17 PM No comments: Links to this post

Did you know that leading 16th century author was a courtesan? 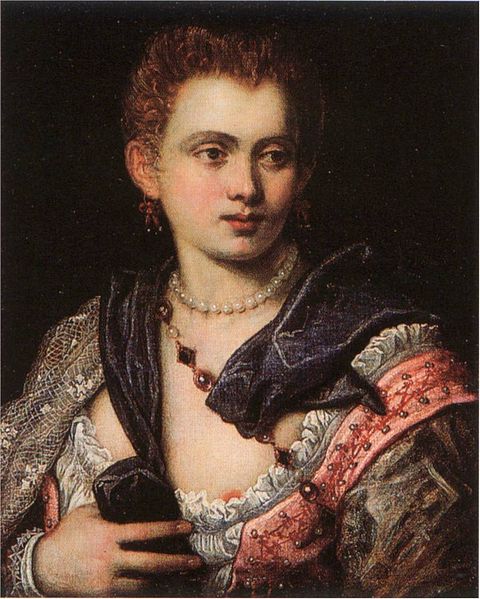 Veronica Franco, a Venetian courtesan tried for witchcraft, was considered one of the leading lights of literature of the 16th century.
Born in 1546, a young Veronica followed in her mother's footsteps - Paola Francasa was “cortigana onesta” whose name was entered in the “Catalogo di tutte le principal et piu honorate cortigiane di Venezia” (The Catalog of All the Principal and the Most Honored Courtesans of Venice) in 1565.
While courtesans in general lived in splendor, and were educated to some extent, the “cortigiane oneste”, the honored (meaning privileged, wealthy, recognized) courtesans were the ones who had intellectual life, played music, knew the literature of Greece and Rome as well as of the present, and  mingled with thinkers, writers, and artists.
We do not know exactly where, how, and in what conditions she died in 1591. Since she already had financial problems nine years before her death (as seen in the 1582 tax report), she very likely died,  impoverished, quite possibly in the prostitutes’ quarter of Venice, forgotten by powerful patricians that admired her at the height of her career as an honored courtesan of Venice.
read more about Veronica
@ Italian Women Writers
@ The Mezzo Cammin
@ Academia - Veronica Franco and the 'Cortigiane Oneste': Attaining Power Through Prostitution in Sixteenth-Century Venice
@ Wikipedia
read also:
Selected Letters dited and translated by Ann Rosalind Jones and Margaret F. Rosenthal
Shinning Eyes, Cruel Fortune: The Lives and Loves of Italian Renaissance Women Poets by Irma B. Jaffe
The Honest Courtesan: Veronica Franco, Citizen and Writer in Sixteenth-Century Venice by Margaret Rosenthal
Posted by Melisende at 5:37 PM No comments: Links to this post

Was Nur Jahan a scheming temptress or just an independent woman who historians couldn’t fathom?

From Dawn:
She was the 35-year-old widow of a man who had fallen out of favour with the Mughal emperor when she caught the eye of Jahangir. Within years, Mehr-un-Nisa, or Nur Jahan as she is known in history, rose to become the most powerful woman in the Mughal empire – coins were minted in her name, she enacted legislation, issued edicts, interacted with foreign traders and determined the empire’s policy.
Rana Safavi talks about the enigmatic Nur Jahan @ Dawn.
read more here @ Feminism India
Posted by Melisende at 4:47 PM No comments: Links to this post 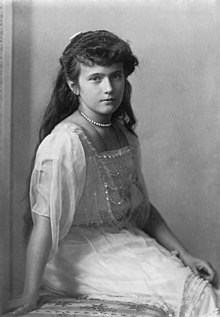 From The Siberian Times (April 2014):
DNA evidence seemed to have put an end to the the claims of American Anna Anderson and others to be the lost princess. Now a new book to be published in Yekaterinburg, scene of the slaying of the Russian royals, will challenge the view that all the Romanovs were shot in a dank cellar in July 1918.
Anastasia - the youngest of the tsar's four daughters - was 17 when she was supposedly killed in 1918.
What makes the theory even more intriguing is that the author is leading Russian historian Veniamin Alekseyev, an academician of the Russian Academy of Sciences who was a member of the Russian government commission which investigated the authenticity of bones purporting to the those of the royals. He became convinced Nicholas II's remains had been found, but he is far less certain about Grand Duchess Anastasia's, whose bone remnants are - officially - interred in St Petersburg.
read more here @ The Siberian Times
Posted by Melisende at 4:39 PM No comments: Links to this post

From allAfrica:
On Thursday [13th Dec 2018], Liberians woke up to the death news of Madam Ruth Caesar [Aunty Ruth], a founding member of the Mano River Women Peace Network (MARWOPNET).

The death has caused many women and activists to take to their social media pages writing condolence messages to the family and remembering the works she did while alive.


Mahmoud Koroma, Program specialist UN Women said she her death is a blow to the women's movement of Liberia. She spoke her truth to power sometimes at great personal risks. Her contribution will forever be remembered.


"She gave counsel generously. Had a listening ear and received all with warmth and a smile."

Posted by Melisende at 4:25 PM No comments: Links to this post

The modern Amazons: an island in Brazil, where women live alone.

From The Mice Times of Asia:
The tradition of the “female tribe” is not so ancient as the Amazons described by the ancient authors, and warlike, and the more wild these ladies will not name.
The only thing that distinguishes these “ladies” from us to you, is the complete lack of men in the County.
In Brazil there is a village “Cordeira de Noiva” , which has existed for more than 100 years. It is home to about 600 representatives of the fair half of mankind, and their children, rather, only daughters.
read more here
@ Mail Online
@ The Telegraph
@ News dot com dot au

Posted by Melisende at 4:04 PM No comments: Links to this post

Protection or Profit? The 1000 Prostitutes Employed by the Church in 12th Century London 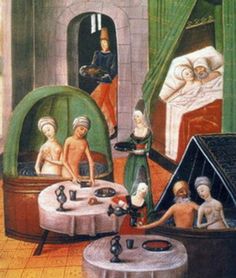 From Ancient Origins:
The modern Christian church does not condone prostitution and would never consider getting involved with it. However, in 12 th century England, a borough of London known as Southwark had eighteen licensed brothels with about one thousand prostitutes employed therein! All of these brothels were run by the church and brought in large sums of money for building churches and other ecclesiastical duties.
Officially, the church could not condone prostitution. However, there were no rules against them profiting from it. It's important to understand that bishops in medieval England were not just churchmen, but politicians and statesmen too. St. Thomas Aquinas likened the place to “a cesspool in the palace; take away the cesspool and the palace becomes an unclean evil-smelling place.” Therefore, prostitution was seen as a necessary evil to gain revenue for the church.
read more here @ Ancient Origins
see also @ The Malta Independent - Nuns Who Lived Off Prostitution
Posted by Melisende at 4:06 PM No comments: Links to this post

"You say that he raped an actress," Cicero told the court. "And this is said to have happened at Atina, while he was quite young."
There was a low, subdued chuckle from the crowd. They were all men — women weren't allowed inside the courtroom — most from the town of Atina themselves. They'd made the 80-mile trip to support a man they respected, whom they believed had been unfairly accused.
His name was Gnaeus Plancius (Quaestor in Macedonia in 58 BCE), and in the year 54 B.C., he was one of the most powerful men in Rome.  She was just a little girl when Plancius attacked her.
Her name has been lost to time — nobody bothered to write it down. To the Roman Republic, she was just some woman in Atina who'd flaunted her skin on stage and then acted surprised when a red-blooded man couldn't control himself.
read more here @ The Week
Posted by Melisende at 3:57 PM No comments: Links to this post

Egypt’s female pharaohs and what really stood behind their power

From National Geographic:
A woman has yet to be elected to the highest office in the United States, but 3,000 years ago in ancient Egypt it wasn’t unusual for women to rule—and some became all powerful, like Cleopatra and Nefertiti. Yet as Kara Cooney explains in her new book, When Women Ruled the World: Six Queens of Egypt, those women were ultimately only placeholders for the next male to take the pharaoh’s throne.
When National Geographic caught up with Cooney by phone in Los Angeles, she explained why Hatshepsut was so perfect; how Cleopatra grew up in a family that makes the Sopranos seem like lambs; and what these women symbolize for their society—and ours.
read more here @ National Geographic
Posted by Melisende at 3:46 PM No comments: Links to this post