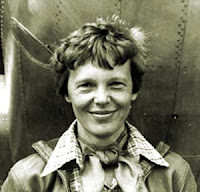 CNN reported Sunday that a 1937 photo may be key in finding, with certainty, the final resting place of Earhart as well as her navigator Fred Noonan, and their Lockheed Electra plane – which all disappeared famously during a doomed attempt at an around-the-world flight in 1937.

Eric Bevington, one of the officers who first set out to find her in 1937, wrote a letter to the magazine’s editor more than 50 years after the first search for Earhart. He still was alive, living in the South of England, and said he had saved his old documents from the inaugural expedition.

In the endless search of historical documents, Gillespie said the group uncovered records that showed a British man named Gerald Gallagher found human bones, a piece of a man’s shoe, a piece of woman’s shoe and a box for a sextant, which is a navigational device, on Gardner Island in 1940. Suspecting it was Earhart, Gillespie said the remains were examined by a British colonial service doctor named David Hoodless who dispelled the theory saying the bones belonged to a stocky male, and the sextant was a mariner’s sextant, not aeronautical.

Posted by Melisende at 8:21 PM

Amelia's Lockheed Electra was within 75 miles of her target Howland Island when her radio cut out. Then the US sent nine ships, 66 aircraft, and well over 3,000 sailors and airmen. They covered well over 250,000 sq. miles of open sea and every island within a 650 mile radius of Howland.

US CGC Itasca Chief Radioman Leo Bellarts 30, was on watch that morning and said: "In the early morning, signals came in pretty good. I actually did go outside and stand right out the radio shack and thought I would hear a motor any second. Her voice was loud and clear; sounded frantic on her last transmission. Then it cut off."

Amelia Earhart was an American heroine, a record-breaking aviatrix, and a celebrity world wide.

Earhart was not a spy -- she was a decoy.

Douglas - many thanks for your comments. I have just finished "Amelia Earhart - Case Closed" by Mike & Marjie Markowski which dispells many of the myths surrounding Amelia and her fateful last journey.