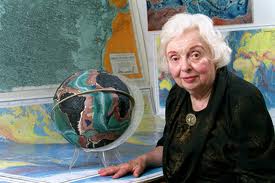 On February 2, 2009, thanks to Google Ocean , the ocean floor's topography was revealed for millions of people to see. Before that day, the 70 percent of the Earth's surface covered by water had been filled in by a cold blank blue, essentially ignored by an interface meant to encourage armchair exploration.
One of Google Ocean's features is the Marie Tharp Historical Map , which allows users to see the Earth transformed. Google's satellite pixels replaced the brush strokes of the 1977 World Ocean Floor Panorama Marie produced with her partner Bruce Heezen and the artist Heinrich Berann. Continents are rich ripe yellows, and the oceans are countless shades of blue; both land and sea darken as if bruised where mountains push through the skins of their plains.
No one had undertaken a close examination of the ocean floor until 1952, when Marie (working at Columbia University's Lamont Geological Observatory) began the arduous task of processing thousands of feet of soundings (sonar pings used to collect depth measurements in bodies of water) from the North Atlantic.