From the Boston Herald:


According to a recent study by two Swedish economists, that brand of gallantry is not only dead, it was buried at sea long ago.

Keen to test humanity’s capacity for selflessness in times of scarcity and duress, the students of the "dismal science" reviewed survival data for some of history’s worst shipwrecks.

What they found was that women and children were only half as likely as crew members and captains to survive maritime disasters.


Instead of "women and children first" and "the captain must go down with the ship," the rallying cry seemed to be "every man for himself," the authors wrote. 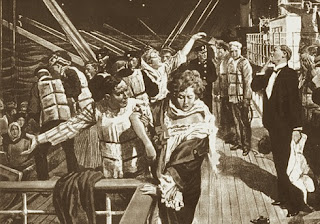 Economists at Uppsala University have turned on its head the idea that women and children are attended to first by investigating 18 shipwrecks that occurred between 1852 to 2011.  Two of the most famous examples of sinking ships, Titanic and Lusitania, were also taken into account.

Other than the Titanic, where three times more women than men survived the disaster, the study finds that the captain, his crew and male passengers were generally saved more often than women and children.

In fact, crew members were 18.7 percent more likely to get out alive than everyone else on board.

And from Newser:
If you ever find yourself on board a sinking ship, you'd better hope you're an adult male. Researchers from Sweden looked at 18 of the most disastrous shipwrecks and found that women and children are far less likely to survive compared to their male counterparts, the Los Angeles Times  reports. What's worse, captains and crew members had higher survival rates than all passengers, shattering the notion that captains must go down with their ship. In fact, there is no maritime law that requires captains to remain aboard their sinking vessel.
Crew members fared the best, with a survival rate of 61%, followed by captains at 44%. Men were the next most likely to survive (37%), then women (27%) and lastly children (15%). Researchers say men and crew members have greater knowledge of the ship, making it easier for them to get to life boats—and they aren't as keen to sacrifice themselves as some may believe. But don't let this distort your sense of history. There were some exceptions to the rule, including the famed Titanic voyage, in which women's survival rate was three times higher than other disasters.

Posted by Melisende at 1:49 PM

Nice article. I found some useful information from your article.
Thanks,
History