Mary Toft - Bunnies In The Oven

From the Wellcome Library: 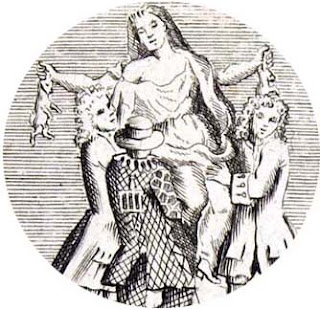 In November 1726, a woman named Mary Toft was at the center of a public debate that included some eminent physicians of the day. Mary Toft became known as the Surrey Rabbit Breeder, based on the account that after a series of miscarriages, she began to give birth to rabbits. This continued in the presence of a Swiss anatomist connected with the court of George I, Nathanael St. Andre. St. Andre published A Short Narrative of an Extraordinary Delivery of Rabbets, and other pamphlets and broadsides followed. Toft came to London, where, after the 17th rabbit 'birth', many became convinced the matter was a hoax. Toft then confessed and St. Andre apologized.

See also the 18th century manuscripts from the Wellcome Library

And from The Curious Case of Mary Toft:

In September 1726, news reached the court of King George I of the alleged birth of several rabbits to Mary Toft (1703-1763) of Godalming, near Guildford, in Surrey.

Toft was a twenty-five year old illiterate servant, married to Joshua Toft, a journeyman clothier. According to reports, despite having had a miscarriage just a month earlier in August 1726, Mary had still appeared to be pregnant. On September 27th, she went into labour and was attended initially by her neighbour Mary Gill, and then her mother in law Ann Toft. She gave birth to something resembling a liverless cat.

The family decided to call on the help of Guildford obstetrician John Howard. He visited Mary the next day where he was presented with more animal parts which Ann Toft said she had taken from Mary during the night. The following day, Howard returned and helped deliver yet more animal parts. Over the next month Howard recorded that she began producing a rabbit's head, the legs of a cat, and, in a single day, nine dead baby rabbits.

Howard sent letters to some of England's greatest doctors and scientists and the King's secretary, informing them of the miraculous births.