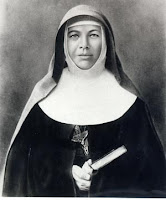 Well, the wait is nearly over. All of Australia holds its breath as we wait for the news that Pope Benedict XVI will announce the canonisation of Mother Mary McKillop.
This week, the Vatican team of bishops and cardinals "cleared" her second miracle - which took place 14 years ago. She was beautified by Pope John Paul II in 1995 after being credited with one miracle - which occurred in 1961 and was recognised and approved in 1971.
Mary McKillop, founder of the Sister of St Joseph, was a Melbourne born woman who dedicated her life to establishing schools and refuges for orphans and the needy Australia wide. Her work was extensively in South Australia, and she died and was buried in North Sydney (1909).
There is a wonderful write-up in todays, Melbourne Herald Sun - Blessed Mary's Melbourne.
More on Mother Mary McKillop
Posted by Melisende at 3:49 PM