The Improbable Life of the Inventor of the Modern Bra

The Improbable Life of the Inventor of the Modern Bra | Atlas Obscura
Mary Phelps, known as Polly to friends, was born in 1891 to a family that could trace its heritage to such luminaries as William Bradford, Plymouth Colony’s first governor, and Robert Fulton, the inventor of the steamboat. As New England royalty, Polly grew up in New Rochelle, New York, wanting for nothing. 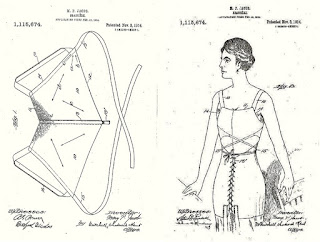 It wasn’t until 1910 that Polly realized something important was missing from her life. She was busy one day preparing for a debutante ball when she looked in the mirror and realized she loathed the way a corset made her look. It bunched up her bodice and squished her breasts into a single, uncomfortable monobosom. In her memoir, The Passionate Years, she referred to it as “a box-like armour of whalebone and pink cordage.”
Like all great innovators before her, necessity was the mother of Polly’s invention. She grabbed a handkerchief, ribbon, and a needle, and before the party was off the ground, had fashioned herself a new undergarment: the modern bra.
Read More Here: Atlas Obscura

Posted by Melisende at 2:57 PM