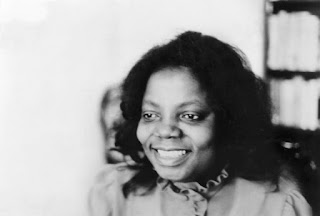 
Buchi Emecheta, a British-based Nigerian writer who, in “Second-Class Citizen,” “The Joys of Motherhood” and other novels, gave voice to African women struggling to reconcile traditional roles with the demands of modernity, died on Jan. 25 at her home in London. She was 72.  The cause was dementia, her son Sylvester Onwordi wrote in the British magazine New Statesman.

Ms. Emecheta (pronounced BOO-chee em-EH-cheh-tah) came to the attention of British readers in the early 1970s when New Statesman began running her accounts of the travails of a young Nigerian woman in London. Adah, a thinly disguised version of the author, lived in a dreary apartment, worked menial jobs to support her young children and abusive husband, studied at night and weathered the slights meted out by a racist society. Buoyed by ambition and pluck, she remained undaunted.

“In the Ditch,” a novel based on those columns, appeared in 1972.  With the publication two years later of a second Adah novel, “Second-Class Citizen,” critics in Britain and the United States hailed the arrival of an important new African writer. Like her immediate predecessor Flora Nwapa, Ms. Emecheta revealed the thoughts and aspirations of her countrywomen, shaped by a patriarchal culture but stirred by the modern promise of freedom and self-definition.

Posted by Melisende at 3:01 PM