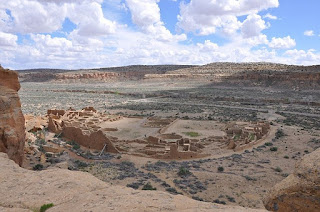 A new genetic analysis of the burial chamber of a complex prehistoric society known as the Chacoans in New Mexico has found that elite status was passed down through the maternal line from 800-1130AD.

The Chacoans - one of North America’s earliest complex societies - are particularly difficult to study because they did not use a written language.

'Pueblo Bonito' is the largest of these great houses with over 800 rooms. Ancestral 'Pueblo' Native Americans, known as Chacoans, occupied the structure between AD 828 and 1126.

If you read reports carefully, you will see that what they found is not a matriarchy, but a matrilineal ruling family. The men became the leaders, but were born to a line of related women, which gave the women power to some extent, but they did not serve as lone rulers.