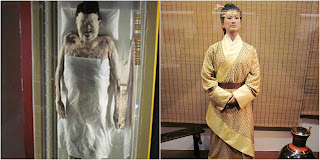 One of the world’s most preserved mummies, the Lady of Dai, is still soft to the touch, has bendy ligaments, and is 2,100 years old
A Chinese woman was preserved for around 2,100 years and is baffling scientists. She is called the Lady of Dai, and is considered to be one of the best-preserved mummies ever found.
Her skin is still soft, her legs and arms can bend, her internal organs are still intact. She has even retained her Type-A blood. Somehow she still has her own eyelashes and hair.
The Lady of Dai is also known as Xin Zhui. She lived during the Han dynasty from 206 BC through 220 AD and was the wife of the Marquis of Dai.
Her tomb was found inside a hill known as Mawangdui, located in Changsha, Hunan, China. The burial site was found in 1971 when workers were digging an air raid shelter.
Read More Here @ the Vintage News
Posted by Melisende at 2:58 PM