The skeletons of kings and queens lying in mass graves in the Royal Basilica of Saint-Denis in Paris could finally have the solemn funeral ceremonies they deserve, say experts in the Christmas issue published in the British Medical Journal.
Many of the graves in the Royal Basilica were destroyed by revolutionaries in 1793 and very few remains of the mummified bodies have been preserved and identified.
Dr Philippe Charlier led the scientific breakthrough that has identified the head of the French King, Henri IV.
A team of scientists from different fields of expertise including anthropology, pathology, forensic medicine and genetic studies worked together to make the identification.
Henri IV was known as the "green gallant" because of his attractiveness to women or "good King Henry" because of his popularity amongst his people.
Despite his popularity, Henri IV was assassinated in Paris at the age of 57 on 14 May 1610 by Francois Ravaillac, a fanatical Catholic. Along with the bodies of other French kings and queens, his remains lay in the graves of the Basilica of Saint-Denis, before the graves were desecrated and the corpses mutilated in the wake of the French Revolution.
The authors conclude that "similar methods could be used to identify all the other kings' and queens' skeletons lying in the mass grave of the basilica, so that they can be returned to their original tombs." 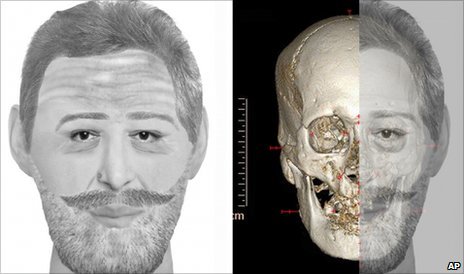 Posted by Melisende at 7:25 PM