Was Hathor Egyptian or Semitic? 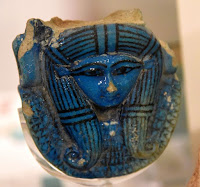 The goddess Hathor is considered central to the Egyptian pantheon. Personifying female aspects of love, music, fertility, and more Hathor was the deity responsible for welcoming the ancients to the afterlife, and an object of worship specifically to miners. But was she actually Egyptian?

However, the presence of Semitic peoples as turquoise miners in the Sinai over 4,000 years ago, plus the evidence of trade connections between the Semitic miners and Egypt going back millennia, plus the inscription, suggest that Hathor found her way to Egypt as Baalat sometime in the second millennium B.C.E. This suggests that at least the original shrine to Hathor in the Sinai, and possibly the later temple, were most likely built by, and for, the local workers, who brought the goddess with them to Egypt.