Romsey Abbey: The mystery of the hair in the coffin

For the past few months, archaeologists have been testing a full head of hair found in a coffin. Is it the hair of a saint? 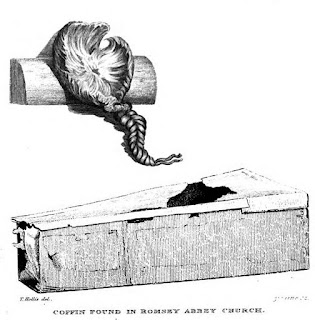 In October 1839, the work of some gravediggers came to an abrupt halt when their tools hit something hard. It was a lead coffin. Inside they found some hair. Human hair.

When it was originally uncovered deep beneath the abbey, it was thrown as rubbish into the coal hole before someone thought it should be rescued and fished it out again.

The hair is shaped as if it is still sitting on a head but there is no skull. According to the archaeologists, the white bits - visible in the photos - are the remains of the scalp. There is even a plait which is several inches long.

"The radio carbon tests that we carried out suggest something in the mid to late Saxon era," Cameron reveals.

The results showed that the person almost certainly died sometime between the years 895 and 1123. To be slightly more specific, there is a 68.2% probability that the death occurred between 965 and 1045.