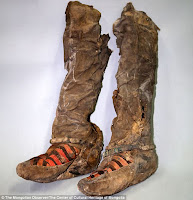 Intriguing new details have emerged about a medieval mummy known for her 'Adidas' boots - which she wore more than a millennia ago.


The body of the woman was discovered a year ago this week in the Altai mountains region of Mongolia.  And her body and possessions remained so remarkably preserved that experts are still uncovering some of the secrets they keep.

Now, scientists have discovered that the mummy suffered a significant blow to the head before her death.

The Mongolian woman - aged between 30 and 40 - hit headlines in April 2016, thanks to her modern-looking footwear, which some likened to a pair of trainers.

The woman was buried alongside a number of her possessions - including a handbag and four changes of clothes.  A comb and a mirror from her beauty kit were also found, along with a knife.  Her horse and a saddle with metal stirrups in such good condition that it could be used today were buried as well.

They are still seeking to verify the exact age of the burial, but they estimate it took place in the tenth century - more recently than originally thought.

Posted by Melisende at 9:24 PM