A woman ruler's skeleton—her head mysteriously placed between two bowls—is one of two royal burials recently found at the Maya ruins of Nakum in Guatemala.
The roughly 2,000-year-old tomb was found underneath another, 1,300-year-old tomb filled with treasures such as jade gorgets—normally used to protect the throat—beads, and ceremonial knives.
The upper tomb's corpse had been badly destroyed by rodents within the last few centuries, but the body was clearly that of another Maya ruler-perhaps another female, based on the small size of a ring found in that tomb. 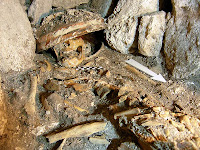 The royal burials are the first discovered in Nakum, once a densely packed Maya center. Study co-author Wiesław Koszkul and colleagues have been investigating Nakum's surroundings, known as the Cultural Triangle, for decades. (Explore an interactive map of key Maya sites.)
"We think this structure was something like a mausoleum for the royal lineage for at least 400 years," said Koszkul, of the Jagiellonian University Institute of Archaeology in Krakow, Poland.
The Maya royal-tomb discoveries are described in the September issue of the journal Antiquity.

Posted by Melisende at 8:23 PM