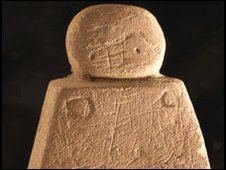 The Orkney Venus, which was discovered a few weeks ago, is a 5,000-year-old female carving which has the UK's first known depiction of a person's face.

The 4cm-tall carving, known by locals as the Westray Wife, will be on show in the ante-room of Edinburgh Castle's Laich Hall along with colourful panels giving information about how and when it was found.

Posted by Melisende at 8:15 PM

Very interesting! I wonder if it's being compared to any of the Pictish stones?

Thanks Eryn - yes I wonder if this stone is being compared with known Pictish carvings. Thanks!