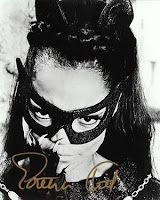 From The Age:
"Eartha Kitt, the versatile American singer and actress who died aged 81, mesmerized audiences worldwide for over six decades with her sultry voice and sensuality on stage and screen.

Kitt, whose outspokenness was a mainstay of her career but also led to a self-imposed exile to Europe in the 1960s and 70s after her stinging critique of the war in Vietnam, won two Emmy television awards and was nominated for two Tony awards and a pair of Grammys."

Posted by Melisende at 7:30 PM