Here is a short list of the various Monastic Orders that were to be found in Medieval England. 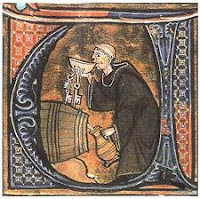 Benedictines:
The Black Monks founded by St. Benedict or Benedict of Nursia (c.480 - 543). Benedict founded many monasteries, the most notable being at Subiaco.
Websites: Order of St. Benedict and St. Benedict on Wikipedia.
Cluniacs:
Foundations began at Cluny in France (910) by Abbot Berno and Count William of Auvergne. Their Rule was stricter than that of the Beneditines. The Cluniacs also supported the reforms of Pope Gregory VII. Widespread throughout England and France.
Websites: Cluny Abbey on Wikipedia and The Church in Britain - Cluniacs
Cistercians:
The White Monks were founded by Stephen Harding of Dorset and St. Bernard of Citeaux. They tended to inhabit lonely areas and toiled the land. The Order was considered austere and their Rule was considered strict.
Website: Cistercians on Catholic Encyclopedia
Carthusians:
Also called the Order of St. Bruno founded 1084 in the French Alps. Followed the Rule of St. Benedict but lived a more solitary life (strictly cloistered), meeting only in Church, in silence. Not particularly widespread in England.
Websites: Carthusian Monks & Nuns and Carthusians on Catholic Encyclopedia
Augustinians:
The Black Canons were founded by St. Augustine of Hippo (d.430). They were considered to be priests rather than monks, and preached in public. There was also a stricter Order of the White Canons or Premonstratensians.
Websites: Augustinians and Augustinians on Wikipedia
Gilbertines:
Founded by Gilbert, a Lincolnshire priest (1130) for monks and nuns with separate cloisters. This was a purely English Order.
Websites: Gilbertines on Catholic Encyclopedia and The Gilbertines
Other Websites:
* Religious Orders in Medieval Britain
Posted by Melisende at 2:06 PM