Jocasta: The Mother-Wife of Oedipus 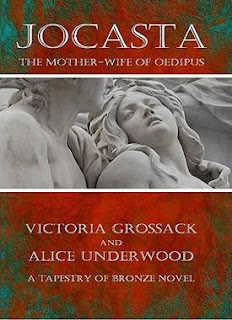 Jocasta is the story of one of the many much maligned women of Greek mythology.  A young noble-born girl is thrust onto the stage of politics when she is married to the new ruler of Thebes.  Her marriage is cursed; her once loving husband has turned away from her and the responsibility of ruling and has taken refuge in drink and frivolities; her only child cruelly taken from her arms.
Jocasta rises to the occasion and takes upon her young shoulders the burden or ruling this great city of ancient Thebes.  With guidance from her family she transforms into the ruler that the citizens of Thebes come to love and respect.
Fate - or the Gods - step in and her husband of many years is killed.  As queen she must now take a new husband or risk Thebes becoming victim to the ever circling threat from envious rulers abroad.  But whom should she choose - the answer comes in the form of a riddle.
Her second marriage brings to Jocasta that which she has long desired - love and children.  But again, the Gods are cruel.  Again, Thebes is beset by misfortune and the Gods demand a greater sacrifice.  But has Jocasta and Oedipus done enough to appease the Gods - no they have not.
Soon the prophecies forecast for both Jocasta and her husband Oedipus began to unravel at an alarming rate - and the sacrifice now demanded of the Gods can no longer be put off - and the consequences are tragic.
Jocasta: The Mother-Wife of Oedipus was written by two outstanding authors, Victoria Grossack & Alice Underwood.They have together written a series of novels set in the Late Bronze Age, mostly in ancient Greece. Not once was I tempted to put this book aside due to lack of interest - the story of Jocasta gradually builds until it reaches its climax in the last few chapters.
About the Authors:
Victoria Grossack: Dartmouth graduate Victoria Grossack leads an international life, with homes in Switzerland and Arizona and a professional career in the financial industry that has spanned the Atlantic. She is fluent in German and French (and English of course) and has an MBA. Her last full-time position was as a Senior Vice President in New York City for a reinsurance company, but she is currently writing full-time and living with her husband who is a professor at the University of Arizona. Her writing has been published in Contingencies, Woman’s World, I Love Cats, and The Journal of Actuarial Practice. She was a regular columnist for Fiction Fix, writing monthly articles that have been used in several writing classes. She teaches writing courses at Coffeehouseforwriters on historical fiction, creating characters, and the levels of structure in fiction. She also tutors mathematics, as solving problems in algebra and geometry make a nice break from creative writing.
Alice Underwood: Alice Underwood studied classics at The University of Texas and Princeton University while earning her degrees in mathematics. Her passion for antiquity has taken her from the shadowed catacombs of Princeton’s libraries to the ruins of Pompeii and the sunny shores of Crete and Santorini. Her work has been published in Consortium, Networks, and The Journal of Actuarial Practice. Currently an Executive Vice President at one of the world’s top insurance brokerage firms, Alice lives and works in New York City.
*
In 1998, Victoria and Alice tied for first place in an international short story contest. After collaborating on several nonfiction pieces, they decided to apply their complementary strengths and perspectives to a work of fiction.
Tapestry of Bronze: The Tapestry of Bronze is a series of interlocking novels set in ancient Greece, starting several generations before the Trojan War. Archaeological evidence indicates that this “Golden Age of Heroes” aligns with Bronze Age dates. Our series forms a tapestry, because the books tie together, though each novel focuses on one strand of story. Jocasta, Children of Tantalus, The Road to Thebes and Arrows of Artemis are available for purchase today. And more are in the works!
Useful Links:
Oedipus The King: The city of Thebes wants its rulers to fix its current problem, an outbreak of divinely-sent pestilence. Prophecies reveal the means to the end, but Oedipus the ruler, who is committed to the cause of Thebes, doesn't realize he is at the root of the problem. The tragedy shows his gradual awakening.
The Mother of Oedipus: Jocasta (Iokaste) was the queen of Thebes and mother to Oedipus, Antigone, Eteocles, Polynices, Ismene, and Menocenes. She was sister to Creon, who also figures prominently in Sophocles' play, "Oedipus the King". She was married to King Laius and bore him a son, Oedipus, who was destined to kill his father and marry his mother: Jocasta.
Posted by Melisende at 10:19 AM