Constance Markievicz - The Countess Who Rebelled 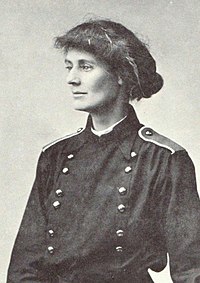 Countess Markievicz played an active part in the Easter Rising of 1916, and also in post-1916 Irish history. Born in 1868 as Constance Gore-Booth, Countess Markievicz was sentenced to death for her part in the Easter Uprising but had the sentence commuted to life incarceration on account of her gender. Her life was full of excitement, and many battles for the causes of suffrage for women or for establishing the independence of the Republic of Ireland from the British rule. There no way to make the long story short in her case.
She was an Irish Sinn Féin and Fianna Fáil politician, revolutionary nationalist, suffragette and socialist. In December 1918, she was the first woman elected to the British House of Commons, though she did not take her seat and, along with the other Sinn Féin TDs, formed the first Dáil Éireann. She was also one of the first women in the world to hold a cabinet position, as a Minister for Labour of the Irish Republic, from 1919 to 1922.
read more here
@ The Vintage News
@ Easter 1916
@ The Revolutionary Countess
@ Smithsonian
@ Independent Ireland
@ Wikipedia
Posted by Melisende at 7:41 PM

thank you for mentioning her!