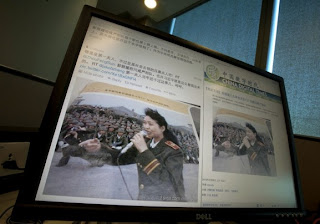 A photo of China’s new first lady Peng Liyuan in younger days, singing to martial-law troops following the 1989 bloody military crackdown on pro-democracy protesters, flickered across Chinese cyberspace this week.
It was swiftly scrubbed from China’s Internet before it could generate discussion online. But the image — seen and shared by outside observers — revived a memory the leadership prefers to suppress and shows one of the challenges in presenting Peng on the world stage as the softer side of China.
The country has no recent precedent for the role of first lady, and also faces a tricky balance at home. The leadership wants Peng to show the human side of the new No. 1 leader, Xi Jinping, while not exposing too many perks of the elite. And it must balance popular support for the first couple with an acute wariness of personality cults that could skew the consensus rule among the Chinese Communist Party’s top leaders.
Posted by Melisende at 11:33 PM