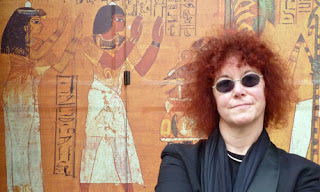 It is a little-known fact that ancient Egypt was populated almost entirely by men. Or at least, this is the impression one would gain from reading many of the publications about ancient Egypt in in which women appear as some sort of minority sub-group. Many works deal exclusively with a male elite of kings, priests and scribes.

Now I'm not for one minute saying Egyptian women ran around doing exactly as they pleased, since most were wives and mothers and the most common female title was Lady of the House, meaning housewife. Yet they did also work in the public sphere alongside men at every level of society, in farming, brewing and baking, buying and selling, sitting on juries and even steering cargo ships.

Ultimately the women of ancient Egypt were able to exercise a degree of power and self-determination which was clearly unusual both in the ancient world and in many places today. I think it's fair to say that they can still teach us much.

Joann Fletcher is a research and teaching fellow at the University of York. Her series was on BBC2 -  Ancient Egypt: Life and Death in the Valley of the Kings
Posted by Melisende at 10:15 PM