From the Hindu Business Line: 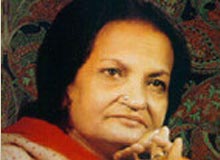 Once the toast of cultural circles, artistes and musicians often slip out of public memory as soon as they quit the stage. The late Begum Akhtar still rules hearts in the world of classical music, but in her home State, Uttar Pradesh, her soul-stirring voice has all but faded from the minds of music lovers. In fact, even as preparations are on nationally to celebrate her centenary year - in 2014 - the place of her birth and musical taleem (education) remains oblivious to her legacy.
But that may change soon if 80-year-old Shanti Hiranand has her way. A student of the great vocalist, Shanti has teamed up with fans of Begum Akhtar to revisit her work and has even restored her grave, which once lay forgotten in old Lucknow’s Thakurganj area.
Born in Faizabad, Begum Akhtar later moved to Lucknow and made it her home. She passed away here in 1974 aged 60 and is buried at a two-grave cemetery next to her mother, Mushtari Sahiba.
See biography of Begum Akhtar at Cultural India

Posted by Melisende at 9:34 PM