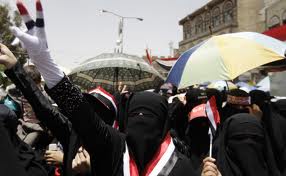 When Sara Ahmed joined a protest in November to demand the resignation of Yemen’s president, she and the other women marched at the very front of the crowd. But no sooner had they set off through the capital than they were shepherded towards the back.
“On that day, I realized we had two fights,” said Ahmed, a 24-year-old sociology student and women’s rights advocate, who took part in some of the first protests in Yemen last year that helped oust President Ali Abdullah Saleh from office.
“A battle against the regime, but also another struggle — a fight within the fight — against those elements inside the revolution who oppose us and our rights as women.”
One of the poorest countries in the world and the worst for gender equality, according to a UN study based on literacy and other factors, Yemeni women defied deep-rooted traditions by even participating in the campaign against Saleh, then became pivotal players in it.
Now with Saleh deposed and a political transition underway, female activists fear the country is moving forward without them, and that men who were keen to have them on the streets crying freedom do not now want them in parliament, universities or the workplace.
Posted by Melisende at 9:26 PM