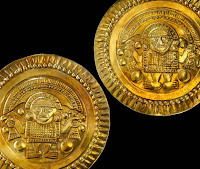 From the Latin American Herald Tribune:
Researchers at the Chotuna-Chornancap archaeological digs near the Peruvian city of Chiclayo have found the funerary remains of a woman who was a priestess of the Lambayeque or Sican culture, said the project director, Carlos Wester La Torre.
The preliminary conclusion of physical anthropologist Mario Millones is that this was a woman between 25-30 years old who lived during the second half of the 13th century A.D. in the waning days of that culture on Peru’s northern coast, whose most important historical figure was the Lord of Sipan, considered the Tutankhamun of America, in the 3rd century A.D.
The research, promoted by Peru’s Culture Ministry, got started eight months ago with an excavation that two months later came upon the tomb, but it wasn’t until a few days ago that the sex and age of the priestess were determined.
Posted by Melisende at 9:33 PM

I am so glad I found this blog! I am writing in a niche within a niche as it is, but your posts are so grand in coverage! I am going to be using some of the women you've shed light onto in my social studies classroom. Thanks!