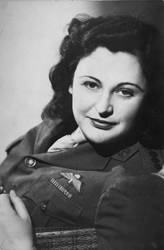 Nancy Wake biographer Peter FitzSimons knew Australia's 'force of nature' better than most.
"I've dealt with many strong personalities in both football and journalism and writing books, I've never dealt with a stronger pure personality than Nancy" he remarked fondly in an interview with Louise Maher on 666.
Wake's heroism is well documented, but through writing her biography Peter FitzSimons grew to know her as a friend visiting her regularly at her home in London.
"I would bring her bottles of gin...one of her great passions was gin!"
But it was, as with the rest of the world her bravery during conflict that FitzSimons was intrigued by.  "She had anger inside her, a volcano that was its best and most useful in wartime launching ambushes on German soldiers" he described.
And it seems that Nancy Wake was as much of a force to be reckoned with in her later years as she was during her time with the Resistance.
"We had many blues until we both came to the conclusion that she was ten times the man I would ever be" recalled her biographer.

The war dead buried in and around Montlucon will be joined by one of their bravest comrades next spring.  Nancy Wake, the fearless Resistance fighter and leader who relished killing Germans as much as she enjoyed a gin and tonic, will have her ashes scattered in the central French town she helped rid of Nazis in 1944.  During the celebrations following the German evacuation of Montlucon, some Spanish Resistance fighters wrapped some local wildflowers in their national flag and presented it to her.  She will now be scattered among the wildflowers on Montlucon.

Posted by Melisende at 8:14 PM