Elizabeth I - Virgin Queen? She was a right royal minx! 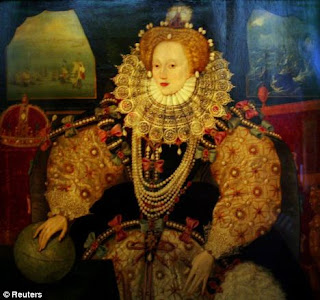 The England that the first Queen Elizabeth reigned over so gloriously for 45 years was obsessed with sex and awash with promiscuity. This unrestrained bawdiness was surprising for a nation that worshipped its head of state as an unblemished virgin.
By the standards of later ages — and even today — society then was especially open in its use of sexual language. Shakespeare’s plays are full of nudge-nudge references to rutting, scrambling, sluicing, ravening and lock-picking.
The playwright’s work mirrored and fed the erotic obsessions of the age. This was a land where prostitutes were known as Winchester geese because the Bishop of Winchester owned much of the property that housed London’s dens of vice.
Monogamy, chastity and celibacy must have been practised by some Elizabethans, but they were hardly the norm. And yet, at the helm of this vibrant and exciting nation — growing, getting richer, reaching out to new worlds — was a woman who suppressed her own desires.
She would not marry or have children, and remained for the 45 years of her reign the unassailable Virgin Queen.

Posted by Melisende at 8:08 PM