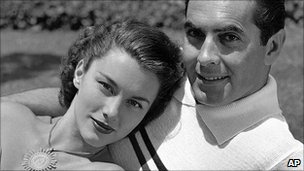 Actress Linda Christian, a 1940s Hollywood starlet who went on to become the first Bond girl, has died aged 87.
She died last Friday in Palm Desert, California, after suffering from colon cancer, her daughter said.
Christian starred as Vesper Lynd, the love interest of James Bond in the first TV adaptation of Ian Fleming's debut novel, Casino Royale, in 1954.
The actress's curvaceousness led Life magazine to nickname her the "anatomic bomb."