From Visible Proofs
In France, in 1840, a notorious murder trial put the young science of toxicology to a dramatic test. Rumored to be unhappy in her marriage, Marie Lafarge, age 24, was charged with poisoning her husband Charles. Witnesses had seen her buying arsenic—to exterminate rats, she claimed—and testified that she had stirred a white powder into her husband's food. The prosecution sought to build on this by introducing the findings of local doctors who performed chemical tests on Charles Lafarge's stomach and on the white powders that had been gathered as evidence. 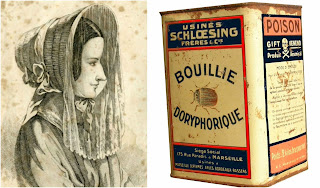 The New Yorker - Murder By Poison
At the resulting trial, the raven-haired Marie at first excited great sympathy. Her lawyer, Hempel says, made sure that the jury knew of “the excellence of her piano-playing, her delightful voice, her competence in more than one science, her reading and translation of Goethe, her fluency in several languages and composing of Italian verse.” She also had a flair for drama. When it was reported in court that a group of doctors had found no evidence of arsenic in the corpse, Marie responded, Hempel writes, by “clasping her hands, raising her eyes to heaven, and then fainting and having to be carried out of the court, while her lawyer sat weeping.” Other experts, however, believed that arsenic was present. About a year into the trial, the renowned toxicologist Mathieu Orfila was called upon to examine Lafarge’s remains.