Clues to an ancient death: bacteria

Gillian Mohney made this report for ABC News in January 2017: 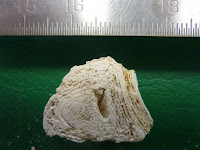 This woman's post-mortem was 800 years in the making, with ancient bacteria providing the critical clue for her likely cause of death, and offering a tantalizing glimpse into the lives of our forebears in the Near East.

In the 800-year-old remains of a Byzantine woman found in Turkey, in what used to be Troy, an archaeologist discovered some nodules the size of strawberries — leading to initial speculation that the woman died of tuberculosis. But the story turned out to be much more complex.

“We speculate that human infections in the ancient world were acquired from a pool of bacteria that moved readily between humans, livestock and the environment,” she said.

Read more about ancient diseases @ the Scientific American and @ the Science Museum
Posted by Melisende at 9:50 AM