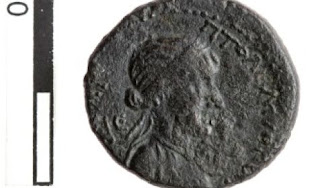 "Found in an archaeological dig in Bethsaida, this rare bronze coin tells of love, trade ties and globe-shaking jealousies. And what if Marc Antony had won the war?

A few thousand years is a mere blink of an eye when it comes to the vital ties between this land and Egypt, as attested by a rare coin carrying historical weight far greater than its 7.59 grams, which depicts the notorious lovers – and which emerged last year from the ruins of a first-century house at Tel Bethsaida on the Sea of Galilee.

Tel Bethsaida rises from the northern coast of the Sea of Galilee, but the coin was minted in another city by another sea – the Mediterranean port of Akko - today better known as Acre. The coin, made of bronze, is about the size of a quarter, being 21–23 millimeters in diameter (it is not perfectly round, at least not any more). Its date shows that it was minted in the last half of the year 35 or the first half of 34 BCE.

Mark Antony, the most powerful man in the world at the time, is on one side of the coin and Cleopatra graces the other. On her side are the Greek words “of the people of Ptolemais.” "
Posted by Melisende at 10:41 PM