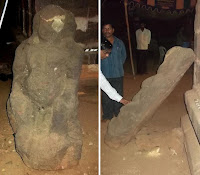 The first-ever ‘Mother Goddess' image carved in sandstone rock — representing the earliest perception of idolising woman as Goddess dating back to 3 Century BC — has been found close to the Sri Chalukya Kumara Bheemeswara Swamy temple at Samarlakota near Kakinada in East Godavari district of Andhra Pradesh.
Archaeological Survey of India's Superintending Archaeologist R. Krishnaiah, told The Hindu that while conducting an exploration around the Bheemeswara Swamy temple to ascertain its origin and antiquity, their Deputy Superintending Archaeologist D. Kanna Babu discovered the stunning and unique image of a seated mother goddess (Yakshini), in a remote corner outside the temple.
The centuries old temple is revered as one of the ‘Pancharama Kshetras.' From the archaeological research point of view, the ‘mother goddess' sculpture was a rare discovery, said Mr. Krishnaiah. This find would be vital for reconstructing the cultural life of ancient Andhra, the origin and evolution of early cultural art. This idol was believed to be from the Ashoka period in 3 Century BC.
Posted by Melisende at 12:31 PM